Right then, massive drama yesterday.. I was in the kitchen on the phone when I hear this mad screaming from the sitting room, honest to god, it was like the Jamaican bobsled team had broken in to gang rape her, it was mental, but alas no Jamicans at all when I got there, Sky had updated and she couldnt find BBC3 for Eastenders. I had to re-tune it through the add channels thingy, it was 9-57, it started at 10-00. I've never been under so much pressure in my life. So, compared to that, gambling is fooking easy man!

Although not that easy actually, on a rare occasion when I graced college with my presence in the morning hours yesterday, got to the bus stop with only 2 quid change in my pocket, bus fare is €2.20, now.. do you say €2.20 and try get away with it by putting just the €2 in or go for €1.80 and try get away with not being caught until you get off. I reckon a bus inspector getting on any said bus in question at a given time in Dublin is around 75/1, now whats the odds of actually being asked past the stops youve paid for? It must be around 200/1 surely. I worked this out at the bus stop, thought fook it I'll take my chance laying a 200/1 shot, no bother to me. Well, yeah, theres the biggest priced winner I'll ever lay. You should have got off two stops ago mate, obviously my "OHH really" wasnt good enough for him. A man of my esteem threw off the bus, shocking scenes. Head in hands man please.

Anyway, tail firmly between my legs, gambling actually went smoothly for the last two days, not so much yesterday only traded one market (the Ronnie game, won €35), today was good you know. Boxing was a woeful fight, really bad, hard-ish to score. Ever get into one of those situations where you think to yourself "Ah, I'll lay it for a tenner and see what happens." Well, I kept laying tenners until I had a liability of €140ish, the odds werent moving properly on what was happening in front of me sure. A nice little hour you know, something I hadnt planned for really just working out to be really profitable. It was an awful fight to watch though, which is why I had the little few quid on the draw near the end.

Found out a little bit more about myself doing in running today too. I cant back. I'm pants, I really am. And it was a sort of terrible day for discipline too, laid the Mullins horse in the bumper for €50, then thought "here, I'm suppose to not bet pre-off ya tosser" so backed it back, then it lost. I'm full sure however had I not backed it back it would of won and I would have lost, sods law, but really it was just coming to my senses. Won money in running on the race then, which should be my only betting you know. Suppose thats where rules come in handy. Also, backed a horse in running, 1.3 and swinging off the bridle, found zilch, in fact went into fooking reverse after I clicked on the hoor. So, you know I'm OK at laying, obviously I've a sort of nack for seeing when a horse is beaten, also like to judge when a horse is in front and going too quick or has little left, like Nina today in Cheltenham in the Cross-Country, stayed there until after the last but I was always confident she'd come back to them for some reason. Anyway.. laying = good, backing = bad. I'll write that on the wall. Small bit annoyed I lost that €22 backing on one bet when most of the others were profitable, bar a few markets with small losses, which is also something I've got to work on, often lay something then change my mind and back it back at smaller odds, so far its never gone on to win. It could work out for me some day, but at the moment liabilities are only smallish anyway.

Snooker went well, its a weird sport, I never expect them to miss at all, and then when they do I'm like "for fook sake what was that you clown!" It does seem a sport that gets me seething for some reason. I dont know. Wouldnt like to do it all the time, but its a grand sport really, good for tv, I should probably be more open minded about them missing, might calm me down. At the moment anyway they'll never let me in the hall to watch them cause I'd be the one down the back shouting "for fook sake" after each miss, like your man in Father Ted after the King of the Sheeps. Remember? No? On your own Stephen?

Also have to add in, heard from a number of people now at this stage, theres a cough in the Mullins yard, its impossible to know which horses have it, the usual you know, some will win and more will lose probably. Theres the reason for me getting burned on the bumper machine sent off at 2/5 in Fairyhouse anyway, too late now! I wouldnt lay any of them just on the basis of it, but the stable is the last I'd want to back at the moment. I was told to stay away from backing his for two months, we shall see, Cousin Vinny runs the weekend and it'll be interesting to see how he gets on. I wonder if things get too bad if he'll shut down the yard, either that or things will turn around in a week or two, but anyway sit on my hands time with Mullins horses for the moment.

Now that I've put the Jamaican bobsled team in my head, I'm gonna watch Cool Runnings.. feel the rhythm.. feel the rhyme.. get on up.. its bobsled time! BOOOMM! Some day I'll grow up.. 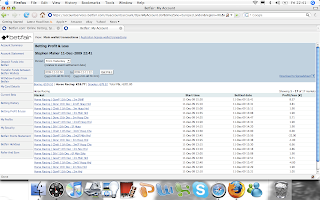