Just sort out the P&L from the cricket, traded the darts a little too but not going mental, not too keen on all the swings.. OK if youre on the right end of them, terrible if youre not.. and if they miss doubles youre seething!

Took Monday, Tuesday and Thursday off this week. Lost a tenner on a slow Wednesday, and traded the test match Friday, Saturday and Sunday.. filled in bits and pieces around that basically so its been a slow week. Delighted to dig myself out of a hole in the test the weekend, it was looking grim at one stage. Another thing I'm delighted about is no pre-off bets either, something I set out to do you know. Everything on the P&L is in running so again a profit there, I'm 100% sure now I'm better in running than pre-off, the last three weeks has confirmed that and I'll be trying to stick to in running only for the future. At least until the flat season is back anyway.

Next week is Christmas so it'll be slow enough too.. then Leopardstown, the calm before the storm next week! Sri Lanka v India tomorrow in the cricket, I'll trade that if the first innings doesnt kill it.. then I presume that'll be it until Christmas.

By the way, did anyone read the John Terry story in the News Of The World today? Caught him good, what a nonsense story though. He paid for his Christmas presents, very nice JT. Just so the Irish papers know, if they wanna give me €10,000 for a tour of Ballydoyle, I'll be more than happy to help them, maybe get the face in the paper too! 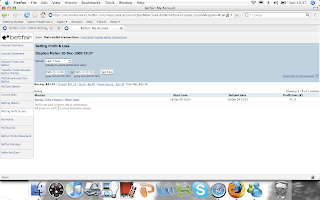