Right then, happy to end with a winning day before Christmas. Traded India v Sri Lanka, Lumpy (the bloke who bets €100,000 a pop in the market) had a bit of a mental breakdown today. He had the odds all over the shop, its fair to say he controls the market because of the weight of money he brings to the table. He fancied Sri Lanka all the way through, but they collapsed going from 165/1 (I think, around that) to 239 all out. Then he didnt give up.. pushed India from 1.25 at the break to 1.34, then after a slow start, as to be expected, pushed them out to 1.42, he was having a shocker. The problem with him is when he has a shocker, everyone notices, when I have a shocker, no one notices! Until I tell everyone here what a eejet I've been. Took him on all day and it paid off, only small mistake I made was laying India back at 1.07/1.08 thinking on a wicket he'd push them out mad again (he did the wicket before that), they never lost the next wicket though.. suppose thats how easy it was in the end with a rate of under 4ish.

I would have thought a man of his esteem would know when to abandon ship really, but he kept going and taking them on when he had nothing going from him, must of lost an absolute fortune, he sometimes does push the boat out a little but he hasnt been that wrong in ages. I dont particularly like taking him on normally, because if something does go his way, he'll absolutely rape you with the odds swing, you'll have to go awe-red at awful odds purely because of his weight of money. Its like today, he puts up €200,000 at 1.34 and people start jumping him to 1.35, 1.36 etc.. so he jumps them again, all of sudden weve a chasing the money fest. And if its going against you, its hard not to panic a tad. I do be alright because I'm never overexposed to my max bet, and can say "fook it" at certain times, but if youre trading above your comfort level, hes a bit of a hoor to mess with. When he switches though, god its a sight to behold.

Anyway, havent done any Christmas shopping at all and its Emmas last day in work tomorrow so its my last chance, I'm a disaster for doing stuff last minute. So no more betting and posts until after Christmas. Just wanna take the chance to say thanks to everyone whos visited, followed, even read one post or commented, be it whatever, its appreciated and you know its been a lot of craic, and hopefully something made sense, if not hopefully I made you laugh somewhere, with me or at me I dont mind. But happy Christmas to you and your family and I hope you have a brilliant one. 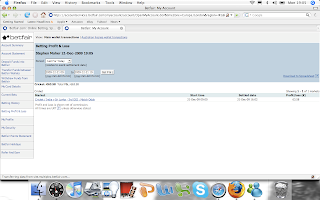