Upon Mr Power asking for the winner of a certain race to be picked, and said horse I (The Daddy) picked for him.. and indeed picked the winner. But of course it won, I'm The Daddy.. I dont pick losers! Only joking. (clearly, HA!)

Anyway, birra Christmas good will and all that, a free bet of €25 on the darts tonight. Went with Andy Smith v Darin Young under 7.5 180s at 8/11, that line looks massively high comparing it to their talent. I suppose PP is factoring in the match going all the way, but even so neither are big 180 hitters and I'm happy to be on under. Cant lose anyway sure.

Very nice Paddy. By the way, the hoor put it under "free bet" so I had to back something, the last time we did this on the Ireland game he just gave me the 50 quid into the account. Recession hitting him hard or what.

Also like to take the chance to say congratulations to my good friend Tomas Reilly for coming out of the closet today, I havent seen him since Thursday but he text me today: "Just in Eddie Rockets now, its not the same without you." What a gay, last time I'm ever sitting beside him in college.

And an update in my life too, my Christmas shopping is now complete, its hurts your wallet. No bets on Betfair because I said I finished up yesterday, and because I was in the que in HMV for fooking hours!

EDIT AT 8-40 PM: I am SEETHING! Absolutely seething, game goes to extra time because its was 2-2 in sets, 2-2 in legs, winner must win by two clear legs. Theyve knocked in 6 (yes SIX) 180s in the extra time so now the 180 count is 8. SEETHING! Couldnt hit one at all during the game and now hitting them every second throw, both missed at least 3 darts to finish the game in normal sets too, gonna get some stick off Paddy, fook it anyway! Thank god it wasnt my own money though, jaysus I'd be off to the nearest bridge if it was. 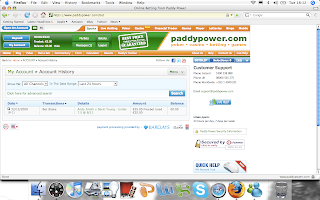