Just been messing around on the darts this evening, I'm knackered after Leopardstown. Tabern v Dudbridge, both were matched at lower than 1.1 before flipping back, so that match was handy to trade (if on the right one!), but never had a liability of over a tenner. I'm sure some people have six tv screens and six computers and everything else with the speed of darts.. I've just been lying on the couch, and its a struggle of move an arm to click. Now thats what you call lazy.

Couldnt be enjoying Leopardstown any more to be honest though, great few days, wish the weather would heat up a little though, its bleedin' freezin'! Fancy Aran Concerto E/W in the big one tomorrow, not big really, but like him at 20s or so. Big fan of Nobel Prince too, so I'll be on him E/W as well. Also looking forward to seeing Pandorama again, beast.

Its been a slow week with Christmas and all. Only a small few bets, nothing worth talking about really. Cricket standing out but sure it was probably the only thing I sat down and took serious for the week.

I'll take it! Next week should be back to normal after Leopardstown finishes. 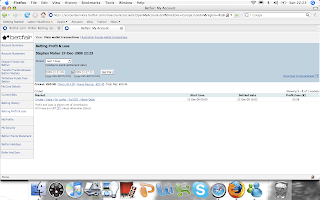