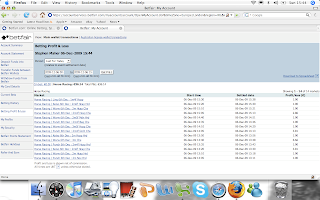 Look, no losers.. but of course, I am the daddy! Starting to see when I'm doing in running for the day I'm either on a 'going day' and perfect, or I'm basically shite and cant do a thing. Not particularly bothered by that you know, I'd just be hoping I have more going days than shite ones, you have to sort of be confident in yourself that'll happen. No real worries today, actually managed to lay a few 3ish/4ish/5ish losers so when I up stakes that'll mean better returns, but I'm actually quite happy ticking along like this picking up €30ish a day, also laying those prices if they win, wont do THAT much damage. As I said before, its a nice little way to win money (if I can) when I dont fancy anything when going through the cards. Not much else on tonight to get involved in, sports been on the last two nights anyway so its only fair Ems gets a birra time.

Looking at the weeks screen shot (dont pay an awful amount of attention of winning/losing weeks but I like to see it every week, its the overall thing that matters but anyway), I am incandescent with myself really, feel like a tosser, take out the Twist Magic lay and it would of been a fair serious week, won €44 with Paddy Power too, just feel gutted that I lost €330 on one bet while I've spent the whole week trying to win that much you know. As well as that, did I think Ruby would make the running? No, actually definitely not. Did I think Big Zeb was better? Yes, he couldnt jump however. Did I think Twist Magic would like the ground? No. Just basically wrong as I said, but afterwards just feel like "for fuck sake I was guessing there" I'd no idea he'd make the running you know. So to lose on something that felt like "guessing" is annoying, benefit of hindsight though I suppose, but wont be happening again. A harsh little lesson though. Apart from that mishap, its been almost plain sailing and enjoying in running, enjoying everything really. Just going forward I'll remember not to "guess" at something pre-off and go in running in the future.

You know, you put so much hard work into your week and then its BAM, crash back to level with one result going against you, but sure it could be worse might of lost more..! If anything though, I'd like to learn these lessons by losing €50 and not €330, I suppose though the more you lose, the more of a lesson it is and you wont do it again..

Also had two football bets, one lost and one still to go. Anyway, why I'm always waffling on about in running / pre-off and comparing..

I know its easy to look back and say, well I should have done this, this and this. But I'm clearly better at one than I am at the other. At least I know this now anyway going forward though, the more I know about my betting the better you know. 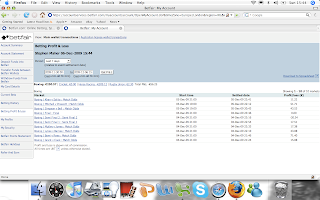