Phil Taylor. Immense. You run out of words sure. Today was a fantastic day of darts overall though, I think Whitlock v Wade was the best match I've ever seen. It was amazing, anyone that seen it will surely agree! Think what makes it great is when both players are playing equally that good you know. Taylor is fantastic, but his games are still one sided even when the other bloke is averaging 110.

Whitlock v Wade, as good as it was, was the only game I was awe-red in, had a few positions, was awe-green at one point but fooked it up. Was in the middle of going awe-green for a healthy sum when Whitlock took out 170, I was just sat here with my mouth open thinking how the fook did he do that, then next leg he took out 150. In the middle of banging in, what was it, 15 180s or something? There was 24 180s in I think 30 or 31 legs. Amazing. At the time I had €160 on Wade at 2.6, Wade won the set before and got a flip flop, was ticking back liability bit by bit because Wade had the throw but sure Whitlock had other ideas. I tick back liability bit by bit in cricket, in hindsight darts probably moves too quick for that tactic, no complaints though, you cant seeth at amazing scenes.

And Barney, how does he do it? He averages in the mid 90s yet has the special ability to make the other bloke turn to absolute mush, Painter never turned up the other night, same craic with Baxter today. Can see Whitlock beating Barney easy tomorrow should he play his normal game hopefully, although no bet until in running, I presume that'll be the biggest match of Whitlocks career so theres bound to be a few nerves.

Taylor v Webster, Websters probably been my favourite player this week, and he looks awesome, only thing is though even with an average of 100ish he'll come no where near Taylor. Plus Webby gets nervous and the early starts this week have really helped him, crowd are more quiet etc, they'll all be against him tomorrow night. Handy win for Taylor probably the outcome.

I said the other day when I backed Taylor that I thought Webster and Whitlock were the only dangers. Even though both are still left, just on what I've seen Taylor do tonight, I dont think hes beatable. Barney is the least likely winner in my opinion. Probably Whitlock has to add 5 to his average on todays match, and sure that was the greatest game I've seen, lewis averaged over 110 in two sets tonight and still lost 5-0. Taylors just the daddy. I'd be highly surprised if he lost. 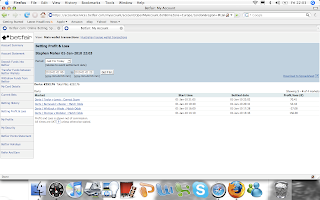