Its official, I'm snowed in, a bit of snow and the country comes to a total standstill, snowmen is clover however.

I've been making a point of staying away from Pre-Off bets lately to focus on in running, but one price stood out for tonight to be worth €100 of my money. For every 180 Barney has hit this week, Whitlock has hit nearly two (1.9 to be exact), just about double the amount. Scoring 15 180s in his last match against Wade while Barney has only scored 13 in the whole tournament to date. Barney looks a bit out of sorts really and hasnt averaged over 100 yet this week, while Whitlock has been going bonkers every time he plays averaging under 100 only once (99.24). Yesterday was the best darts match I've ever seen where he averaged 105.37 over 8 sets.

VCbet go 4/5 Whitlock most 180s which seems a tad high to me considering the ratio of near 2:1 in his favour over the week, theres not much money in the market on Betfair but as I type Whitlock is 1.64 to back and 1.78 to lay, you can lay under the 4/5 youre backing at so it seems a tad high of a price to me.

Whitlock has hit 34 180s in 85 legs, one every 2.5 legs. Barney has hit 13 180s over 64 legs, one every 4.9 legs. Whitlock has played and beaten in the following order Colin Osborne, Wayne Jones, Terry Jenkins and James Wade, with a lowest average of 99.24 scoring 5 180s that time. Barney has beaten Warren Parry, Brendan Dolan, Kevin Painter and Ronnie Baxter, Painter and Baxter were absolutely shite though, he beat Painter with an average of just 89.14, beat Baxter 5-0 with an average of 95.16, players just havent turned up against him at all.

I also favour him to win the match. I was hoping for closer to evens though to be honest given the market love for Barney, at the price now I'd rather wait and back Whitlock at 1.4 - 1.5 with a fast start and a set up than back him at 1.75 at 0-0. 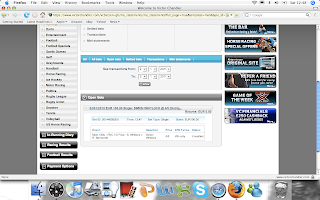