Phil Taylor. He really is the daddy. Was tested all the way tonight too, upped it again and again, that 167 checkout changed the game really. Then the 170 checkout against the darts when Whitty was sitting on tops, he even said well done when Taylor got it. Very hard not to like Whitlock, have an awful amount of time and respect for him after this week, up there with my favourite sportsmen now, he seems a nice bloke too and you can only wish good things for him. Hopefully he gets a spot in the Premier League.

Had a great week gambling really, cant fault it at all, cant exactly put my finger on it you know, just on a good run, I dont change things so its just the ups and downs of gambling. One sight difference this week has been what I've been doing in between markets, playing poker, or trying to play poker would be a more correct assessment. Not for money now, free on Facebook, Texas Hold Em, I wont lie, it makes me seeth, it really does. Awe-in with three Qs only to be followed by the bloke behind you with three Ks. Seething. Pair of Ks with a 10 kicker, beaten by a pair of Ks with a J kicker. Seething. However, the thing about playing it is, I never feel in control at any moment, in control of my own business yes, but not knowing what everyone else has and having to guess. So, when I click back over to Betfair, I'm in control of everything, my own trades, how I see the game, how I see the market, theres no guessing, I feel confident and I feel like I know what I'm doing. Its an indescribable feeling really but poker takes away all that feel good factor I have on Betfair, but then almost makes Betfair feel easier to trade at the same time. I know, weird.

I suppose I've also been helped by the fact I've been snowed in since new years and couldnt leave the house. At least I know what its like to be skint now though, weve been living off Christmas biscuits for the last three days FFS, last time went the supermarket was before Christmas, normal people would obviously go in between Christmas and New Years but sure Leopardstown was on. So, we have bread, but no butter. We have tea, but no milk. Fantastic. Upon inspection of the kitchen today however we do have 12, yes 12, spare tins of cat food still, but no food for ourselves. This is the first time weve ever been snowed in actually, and I'm still full sure, absolutely full sure, we'll be buying 24 tins of beans and 48 weetabix every week for the rest of my life, "just in case Stephen, just in case." I dread to think what she'll come home with from the supermarket tomorrow, I'll have to build a new shed or something.

Its not all bad though being snowed in, I'm now fully up to speed on Eastenders, Corrie and Hollyoaks, I've watched Twilight, Bride Wars, Mamma Mia, in fact I've watched every click flick possible, honest to god, all I'm short of doing is painting my nails. "Being snowed in is really romantic isnt it Stephen," ah yeah, I found an old bottle of vodka in the kitchen while routing through the presses looking for food and never told her, I've had a great few days.

Looking forward to being able to leave the house tomorrow. Although back in college so cant devote the whole of my time to gambling you know, so things will slow down. Frustrating to have a good week, be in good form, and then have to go to college, but sure it has to be done and its only a couple of months of the year I suppose. When I'm on a good run and can feel it I like to kick on with things, and then hit the wall, as is the norm you know, nothing lasts forever, then revert to trying not to lose rather than trying to win. Like, if you can go through bad patches and not lose, then you win during good patches, you can only finish in profit right? Back to poker then.. 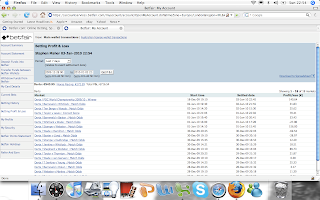