Decided against having a bet today, had another shocker on the snooker yesterday, with lower stakes though so under €50 awe-red instead of €100+, not the worse thing in the world to happen but hardly a good sign. Decision making as gone out the window for the time being.

This week has been a bit mental really. I was going well until the cat got sick, was over €250 in profit and ended up losing, you know the house has been in utter chaos, I joined that group on Facebook "Only in Ireland does a bit of snow equate to a National Emergency" taking the piss, well only in Maher towers does a sick cat equate to total meltdown. Its hard to focus on Betfair and once you ever so slightly take your eye off the ball, things start going pear shaped fast. Little unlucky with the boxing draw but had the chance to green and didnt take it so my fault, and the snooker, well I'm glad its over put it that way. Think Ronnie will win the final but not enough to back him.

Had a good two weeks previous to this one though and once I've lowered stakes I can have a bad two weeks now and its still an absolute fact I wont lose as much as I won during the good form. The cats getting better after another vet visit yesterday, another tomorrow morning so thats alright, and hopefully the house will be back to normal as soon as possible because it really does my gambling no favours. I like everything happy and peaceful you know, and its exactly the opposite at the moment.

I was watching a documentary last night, where Sir Winston Churchill said: "Success is the ability to go from one failure to another with no loss of enthusiasm." Might be alright for war, but its fooking impossible to do that gambling! Although cant be too unhappy about things, "only" lost €100, I've had worse weeks like. Last three days €350 has gone down the swanee though so just have to stop the rot if you like. I know one thing though, a bit of panic and chasing things that arent there will only make it worse, a bit of calm and waiting will probably do the trick.

Everything for the last two weeks as been In Running, no Pre-Off bets, so thats another good thing, sticking to what I'm best at. It feels shite losing and less than shrewd, but sure you cant win every week.. 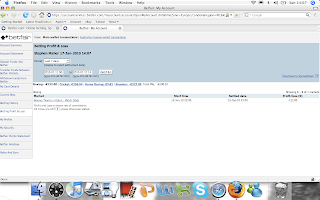