Poor, poor effort today. I've always believed that gambling was 100% in the mind, you know we all see the same race, read the same Racing Post, watch the same match, see the same wicket, etc etc, its all the same for everyone and what makes the difference is whats in between your ears. How you process things and what gives you different thinking from everyone else. People constantly row over opinions yet seem to be forgetting were all different you know, and just because you think something is a good bet doesnt mean someone else should too. Its like, for every price you think is high, theres someone laying it because they think its low.

Anyway, mentally I wasnt at the races today. Now, I've no excuses for my trading/gambling, you can only expect back what you put in and I deserved to lose today. But the cat being sick this week and had a bad day coughing, weve had him 9 years and it really breaks my heart to see him not well you know, I know he'll be alright eventually but just being helpless, hes there coughing and what can I do bar sit beside him and put my arm around him. I cant make him feel better and its killing me, I'd actually rather I had it instead. I've never had a sick pet before and I honestly never thought it'd make me feel this bad.

As I said though thats not an excuse for losing, you know I wasnt fully focused on what I was doing and when you dont respect Betfair, you dont win on Betfair, its simple. I made so many bad moves on the snooker I actually lost count, I went from €10 awe-red after two trades to €150 awe-red maybe less than an hour later, I wasnt given any help from the players mind, who were absolutely shite. Anyone who watched will know, it was dire viewing, but do things right and theres money to be made like everything else. Again, once I lose trust in a player/team, the market is a total mare for me, I should notice it straight away but you always think you can make things better.

The cricket went well this morning, that was before the cat started to cough for the whole day though and my mind wondered elsewhere, I'm better on cricket than snooker anyway sure, the two arent connected. And the boxing, ah the boxing, a fooking draw! How many draws are there in the year.. and FFS why am I always involved in them! I was being greedy bugger though, backed Dolan at all odds over 3 and didnt trade out when he went down to 1.3, I had him two rounds ahead easily but sure the judges didnt. Unlucky to finish a draw but I could of been awe-green, so not unlucky to lose. Again, you know, bad decision making and not 100% concentration. I deserved that kick up the arse not trading out.

Normally start each day with €400ish and crack on, knocked it down to €200 for the time being. Plus is this the bad turn of luck after the fantastic run? Uh oh, uh oh. Dont think it is, today was just me being pants, but you know once the head isnt screwed on I'll never do any good, small stakes for the next few days and go from there. I'm gonna stay up all night to keep an eye on the cat too, I know people will think its silly, but if you have animals and like them you'd understand.

Probably a small bit glad I "only" lost €200ish, lesson learned anyway, I cant win if the head isnt there, like everything else in life I suppose, you only get back what you put in. €200 is probably a cheap lesson for the future, put under "life experiences" no bother.

If ever there was a time to watch the bloke falling on the news again..
(who by the way has over 50,000 fans on Facebook now!) 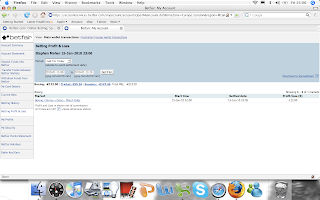