How Thin Is The Line Between Winning & Losing

Shaun Murphy v Mark Williams, Murphy in the balls, one red left to make it 5-5 (colours were easy-ish looking, would have got them in my opinion without worry), Williams trading 1.55, I had laid 1.4ish mid-break, if he gets the red its a massive flip flop because Murphy started the match favourite, if he misses its 1.01 Williams straight away. He misses the red and leaves it in the jaws. I did the head in hands man, I did. Not seething, these things happen sure, jaysus its a horrible feeling in the stomach though, especially when youre not expecting it like. I suppose to add to the horrible feeling I was €25 awe-green before being €110 red on Williams after that move. Er, gutted, but sure its done. Small margins.

The Ronnie match went slightly better anyway and picked up a small few quid there, he is actually immense at giving interviews, the BBC hype him up no end and then he just comes out and goes "Yeah I was shite, its pretty boring, I'd rather be 3-0 down than 3-0 up to make it interesting." Whatever about him playing left handed, found this video on Youtube of him playing with one hand.. potted both balls too, in a proper game and all against Williams.

Ah, it'll take a small while to get over that missed red but what can you do except move on to tomorrow with a clean slate. Seething over it will hardly make any difference, probably the only thing it'll do is annoy me tomorrow again if I keep thinking about it. Annoying, but "fook it" its done. 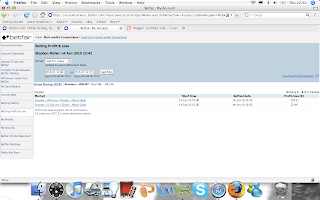