Really have to sort out the site problems FFS, awful again today, the term "fooking useless" comes to mind, APIs down all day and whats even worse on the main site, I was doing bets and they werent coming up on the market, or in my bets, but the bet had been placed. SEETHING. Gave up for the day after that happened, I hate moaning about stuff but its incredibly annoying, just fooking fix it!

Huge point I noticed today, not sure whether it was to do with the site problems, but Betfair SP.. I've never placed a bet on it to date, but I thought it was supposed to return the overround to 100%. First two races at Kempton were returned at 104% (one was a 4 runner race) and first three races at Plumpton were 105% twice and 106%, races at Limerick were returning at 110% (one 116%!) and Punchestown had one at 109%. Youre adding on 5% commission each time, so that race at Limerick people were betting to over 120% on an exchange?! Very weird. Have they added an extra 5% without telling anyone? I thought the software was programmed to return the overround programmed, which was meant to be 100%? Anyway, I've far more things to worry about than an overround, I'm sure the Racing Post will pick it up tomorrow (wink wink), or they could completely and utterly ignore it and pretend it never happened, they could perhaps slag off the Irish bookies instead because they dont have a full page advert with them. Might just be the site acting up, be interesting if it continues though.

Cricket this morning.. Boom Boom biting the ball! Cheating fooker. Sky said afterwards they had something like 26 or 28 cameras there, what the hell was he thinking doing it in front of everyone. When I woke up Australia were trading at 1.07, couldnt resist the 1.5ish when they lost a few wickets, Pakistan always find a way to balls things up. How did Australia get the winning runs? Hit it straight to a fielder (out) but it was given a no ball for height, that was the last over too with the Aussies 8 down, it would only happen Pakistan!

Sir Alex Ferguson is a genius too. Looks at the game for the first 20 minutes, decides to change things a tiny bit because Arsenal have too much of the ball, United ten times better in attack and then 3-0 up. Hes the daddy, he just is. One thing though, the ref gave five minutes extra time, did he think United were losing 3-1 instead of winning FFS, ya cant do that.

Taylor getting beaten hurt, messed up the week, but Nicholson played well, had 100% checkout rate after 7 shots or something, went 9-9 thought Taylor had him, but wasnt good enough last leg to win.

As I said Taylor losing messed up my week, apart from that wasnt the worse in the world and was in horrid form at the start of it, felt my touch coming back a little from Thursday onwards, Taylor losing a setback though. Hopefully next week is better but still small stakes until I stop backing losers FFS.. 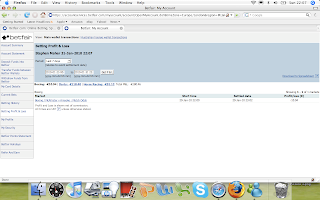 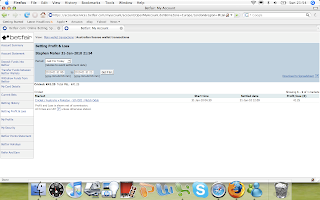