Why oh why oh why does he make life so hard for himself, FFS I am SEETHING! I actually quite like the bloke, his interviews are priceless, argh why does he have to miss so many doubles though FFS! The problem is, he has all the talent in the world and knocks in 180s for fun, then misses six darts at a double and of course lets the other bloke in. Then does loads of hard work, gets it back to level or 2-0 up in legs, then opens with a 41 or hits 22 when on a 120 finish, just SO frustrating. Fair played to Adams though, he played well, had an average in the high 90s (I think) and finished well. Just a mental note to never ever back Chisnall again because he has your heart in your mouth on the doubles, which makes it impossible to trade for me cause I cant trust him, my book yesterday was terrible and again today was terrible. Annoying from my point of view because I feel like I'm backing the better player but being let down by him, which is the one thing that annoys me you know.

Snooker on tonight but cant do it, the heads gone. Cricket went well this morning again, surprised Lanka choose to bat first after winning the toss given every team has won batting second but sure I have no control over that, India won handy in the end. Another game on tomorrow, but involving Bangladesh so you know, anything can happen with that lot, be interesting if they chase because they'll have the advantage, but er, trusting them to "bat sensibly," I dont know. Plus its a dead rubber, India already through, Bangs already out. Could be a few mad swings mind.

Funny how I was only thinking to myself I havent had a losing day for two weeks and then one comes straight after, should of kept my mouth shut, but sure it could be worse.

Niggly annoying end to whats been a fantastic week again, crickets gone really well, nice to have it on you know, its my favourite sport so I always enjoy when theres a game every second day or so, win or lose. The dew factor in the ODI tournament has been absolutely massive, every team batting second has won this week and thats helped my betting because I've always went with that in mind starting off. Plus the test match probably just caught a good hour to enter the market. The darts was pretty good but just the Chisnall matches let me down, lucky to get away with it yesterday, wasnt lucky today. Er, I'll never back him again, the stress of the misses is unbearable! Massively talented, it isnt half bloody annoying though. Hopefully the snow buggers off and we get a bit of racing next week, even though I wouldnt be betting on it much, I still miss it being on every day.. 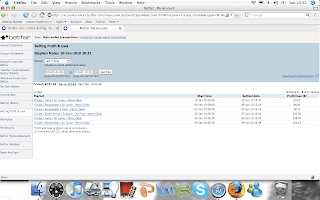