England v Wales, theres two hours of my life I'll never get back. Brutal! Ireland v Italy wasnt much better mind. And a loss on both to boot. Thought Ireland -32.5pts was a fair enough bet at odds against at half time given the start, thought they'd kick on in the second half, they went into reverse. Then England v Wales - England are shite..! But Wales were worse (I think), so many knock ons, schoolboy stuff. Problem was the market was so bias in favour of England I laid them at nearly every moment down from 1.4 to 1.1, the 1.1 with 20 minutes to go, Wales with the ball and having scored the last try, that price was insane. But Wales couldnt make anything of it sure, scored a try but then let England straight back in. A big enough loss from what was a small enough bet at the start. I hate those type of markets were you always think the odds are low, fighting against the market vibe, theres never gonna be trading because I'll always feel the market was low, its either jackpot in the last ten minutes or its kaput.

Everything I do on the horses is summed up by "one step forward, one step back." Again, win a tenner, lose a tenner, win a fiver, lose a fiver, etc etc etc.. off away from the computer to Leopardstown tomorrow so hopefully it'll turn around. The good thing is I'm not losing, it does get a little frustrating not making any ground after a longish spell though. Have to keep pinching myself to remind me it could be worse than level.

Have felt a little unlucky the last two weeks but got a massive break last night on the boxing, laid Booth at all odds from 1.3 going to 1.7, then backed him at all odds from 4 going down to 2.5 when things looked to be changing, he went down to as low as 1.38 before the fight was stopped because of a cut to the other bloke. It was only after everyone found out the judges had Booth 3 and 2 rounds behind, so he couldnt of possibly won! Er, I'm not inclined to think I was just wrong, sure the whole market was moving with me, we cant all be wrong like. Those judges on a Friday night are consistently miles off with the market though, only thing is you cant change the way you see the fight, nigh on every week the markets at 1.2 one fighter and the judges call the other bloke the winner by 5 rounds or something, we cant all be that wrong! Then of course there is the draw.. lets not go there.

So, a loss for the last two days, back to -€30 for the week, deja vu with last week FFS, just cant get going lately but I accept it you know I wont push things, probably wont have an online bet tomorrow. Fancy Cross Appeal in Leopardstown, I know the stable like him, he went off at a mental pace the last day, him and Andy Macs horse really cut each others throats, might upset the favourite in the first tomorrow for me. Obviously Dunguib is the main reason for going, its a poor enough Gold Cup by recent standards, if I have a bet in it it'll only be 10, 20 quid at the most, Money Trix or Joncol.

The novice chase looks good, keen enough to take on Weapons Amnesty over this trip, although the ground will make it a test as favourite I'll take him on with something, Cousin Vinny didnt jump at all well the last day, that leaves Roberto Goldback and Zaarito. I think Zaarito is a serious horse, only problem is hes probably odds against to jump around. I'd love to see him complete tomorrow just to see how good he actually is, he has form with Captain Cee Bee and breezed a race here over Christmas, couldnt back him with confidence though because of his jumping. Nice to see two oul fellas Afistfullofdollars (remember him!) and Agus A Vic in the chase at 4-20 too, hopefully one of them wins. 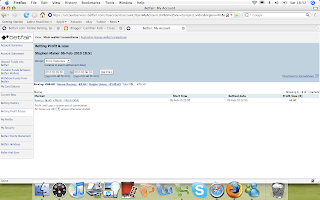