Zaarito, why does he do it to me! I just saw he went down to only 1.52 in running but he was cruising going to the last, "would have" won in my opinion, but sure jumpings the game. Its awful though, I dont want to give up on the hoor, but he cant jump, like if he was your wife and you were only getting two rides a year, you wouldnt be happy.

Dunguib was impressive again, being picky he didnt jump very slick and made a few mistakes, would want to cut that out for Cheltenham but still cant see a novice to beat him. Machine. I wouldnt be dead keen on him being held up at Cheltenham making a few sticky mistakes like he did though, but if he jumps better sure his cruising speed is unreal. I suppose people will question what has he beat, then again what has he got to beat in Cheltenham, not that many good novices around this year for some reason, that I can see anyway.

Didnt have an online bet today, so just the week to tie up, "one step forward, one step back" would sum it up to perfection. Finding it very difficult to make money at the moment, but not losing (a lot) so I'll keep going, just a little poor patch. I dont really mind being level you know, no harm done. Obviously everyone wants to win but I cant win all the time anyway, whatever about everyone else.

Onwards and upwards to next week.. 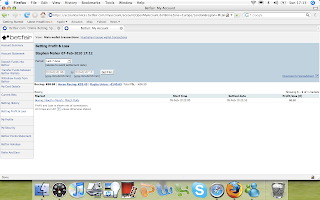