Anyway, er, today was a bit of a waste of a day really, spent most of it looking at a screen like this.. 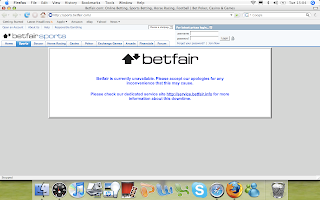 That was AFTER the 'upgrade.' Should of went to the driving range for the day and forgot about it really but I did the horses in running, only small, was a boring day really, nothing happening, would drive you to drink.. which is why I'm finishing early to do exactly that for the footie this evening.

Site was down completely from 3-00AM until 11-00AM (I think). I'm 99% sure Australia will win every game against the West Indies, so had a small bet on them before going to bed, couldnt trade obviously because no market, as I said I'm pretty confident they'll win, and its easier to back them when you dont have to worry about which way the odds go to make you nervy on the button. Its like when they played England, SP was 1.55ish range every game, traded odds against every game, won every game (bar the last one when they couldnt give a monkeys and rested players). Next game is Friday but I'm away for Valentines.. dont ask.

Premier League darts is back Thursday night though.. BOOOMM! 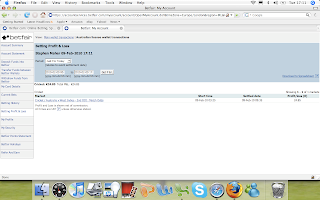