Jaysus, stomach is a bit dodgey after watching the boxing, your man got one hell of a hiding, how the ref let him continue I'll never know. If that wasnt bad enough, the corner let him go back out FFS. At least I won a tenner from the poor bloke getting his head kicked in though. It could be worse. (Hes alright by the way!)

First half serious day back betting and it feels fantastic. I'll tell ya something though, I'm a serious fooking eejit, I spent the last three and a half days doing an assignment, then when finished, realised it was a group assignment and I would of only had to do 1/3rd of it and could of got a nerd to help too, all I had to do was read the first page, it was a heading and all, in bold "group assignment." I wouldnt mind, it was one of those were, youre not really serious about it, but you just think to yourself ah here fook this I'm jumping of a bridge. Head in hands man, if I'd a brain I'd be dangerous.

Anyway, did the England v Pakistan game today, sort of a perfect game for my style, low odds to chase par(ish) so no bet, early wickets for higher odds, then they look for singles and to build partnerships so I'm in the market and ticking it down as they go along, you have to trust the batsmen though, KP and Morgs, so no issues of trust there whatsoever. In my last post I said how I didnt know whether to go awe-green or let it run (without liability), I let it run the last time and finished with nothing, so was sort of kicking myself. Today I went awe-green, and it was a 1.01 train from the time I was on, so I was kicking myself again because after, I wanted to have rode it out. My thoughts are that, I cant win with the thinking behind it you know, I want to be perfect yet theres no such thing as perfection, no matter what I do after the game I'll think "well, I could of done this, this and this." I'm just gonna focus on getting rid of liabilities and then decide on letting green run on one side or go level, depending on the game, and if its wrong, its wrong, what can I do. Hopefully I'll be worrying about going awe-green as opposed to worrying about going awe-red!

Sky was about near 30secs behind. It was pap. Odds moved in.. "wicket?" odds move back to where they started.. "dropped!" bowler runs in, ball skied, ball dropped! It was impossible to trade it out and out because of the movements, wickets went 5 ticks, then it happened on Sky and it went another 10 ticks or so. Its scary given the IPL hasnt agreed a deal on the UK TV rights yet. In another words - were fooked, one ball behind through Sky, whats it gonna be behind on Youtube?!

Messed around a tiny bit on the darts last night, nothing major, and same on the horses. Screen shot from Monday sorts it all out. Have 10 days to do nothing but gamble now, I'm absolutely delighted and cant wait, havent had that since I was snowed in. Its no craic in the real world.

And the Tiger Woods interview - theres 20 minutes of my life I'll never get back. I was expecting something interesting, or at least when hes coming back. Instead, we get a load of shite we already knew really. And it looked a bit made up. He must be going through a lot though so good luck to him, the medias a bit of a hoor really, I mean who really cares what he does in his spare time. If Chelsea were 2/1 to beat Sunderland at home tomorrow, you wouldnt sit there and think "jaysus, I cant back them, JT and Cashley cheated on the wife didnt they."

Let them do what they like sure, its not as important as say, who killed Archie Mitchell is it, Ems backed Grant at 20/1 and he was only 10/1 before the show, I had to sit her down tonight and explain you cant eat value, that shes a mug, and that I am the daddy for gambling.. I'm sleeping on the couch tonight. Its not a bad thing though, while in New York, I got a wonderful education in how to "dress" the bed. Now I have 6 pillows and some throw over thing on the bed, all of which I have to remove before I get into it, missing valuable lying down time. Where did it all go wrong.. 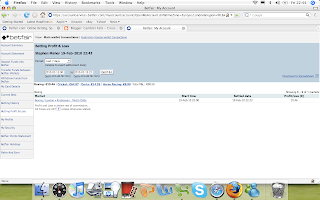