What Else Would You Be Doing..

Saturday afternoon 20/20 cricket. For me, I dont think theres anything better to do, win or lose. And Betfair didnt even crash, has this ever happened before?!

Abdul Razzaq, 46 off 18 balls. Immense, just absolutely immense. He was 25 off 9 at one stage! 25 off 9 FFS, if someone like Pollard, White or Taylor did that you'd never hear the end of it. He never even hit a 4, just kept hitting 6s, amazing scenes.

Obviously I'm incredibly bias having laid England at 1.15, and have got a full blown man crush now. The only reason I laid England was theyre on my list of teams/players to lay short, funnily enough Pakistan are on that list too, West Indies are in there also, the usual ones. But the market swung from 1.15 England to 1.15 Pakistan in two overs sure.

Before that, it was the hardest game I've traded in a while. Just, cant trust Pakistan, cant trust England, it was awkward. Englands bowling lineup is weak and Pakistans batting lineup is mental, theyre all nutters. Was level after spending the whole day trading it, then get €130 awe-green for less than two minutes. It'd be great if I could time it for that two minutes and then bugger off for the rest of the day, doesnt work like that though unfortunately.

Reckon England really have to get rid of Denly as opener. They cant have Trott there too, he ended on 39 off 51, for someone opening with the Powerplay thats brutal. Both seem to need time to "get in" and you need a hitter, cant have two slow starters, youre on the back foot from the word go almost. Trotts innings probably cost England 10 more runs, and probably the game then you could argue. Denly didnt score any, when has he sure? Get someone else to open with the go ahead to take on the bowling, they nearly have the longest batting lineup in international cricket.

Look at the others sure..
Australia have Watson.
India have Sehwag.
West Indies have Gayle.
Sri Lanka have Dilshan.
New Zealand have McCullum.
Saffers have Smith (and Gibbs before).
And Pakistan have bleedin' everyone to whack it!

Why cant England follow with an opener to have a whack. They open with Denly and Trott in 20/20 and Strauss and Denly in 50/50, all slowish starters. I know the hitter wont work every time, sure look at the others, Gayle often goes for less than 20, Sehwag first ball etc. When that happens in England straight away heads are called for and its back to square one, the other countries give them time. They need a hitter, and no it wont work every time, but its better than getting a duck off 5 or 10 off 20. Sometimes 15 off 8 is enough, gets things going, bit of panic in the field and a bit of shouting in the crowd. Swann was number 11 today, and has scored 50s in test cricket and ODIs, theres no reason why they need to "keep" wickets in every game, its 20/20, have a whack. Pakistan lost two wickets in the first over today and still finished with the same number of wickets lost as England did.

Anyway, KP went up around 10 times in my estimation for running out Trott, Trott roared no the minute he hit it, KP just ran, it was on purpose 100%, you had to see it to know what he did. Fair played to him. Its a shame all the shite that went on in the camp with the coaching staff when he was captain.

Excel shows it was pretty much a certainty that England were winning before Razzaq, it was rightfully in the 1.1s, I wasnt even laying the 1.15 as a winning bet, it was one of those "scope for panic" bets that I like. Sometimes costs me, sometimes works. 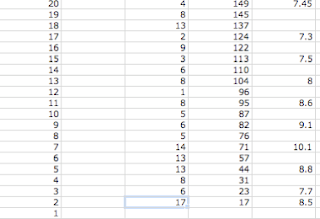