Should We All Be Lumping On?

His name - Jose Mourinho. And his home league record.

Forget cups, Champions League, friendlys and away games. Mourinho hasnt been beaten at home in the league since 2003, over 130 games.

I only found out this flicking between channels, Inter were down to 9 men at HT to Sampdoria, sitting 5th in Serie A, unbeaten in their last five games. And Inter made it look easy, defending out a 0-0, Samp had one shot on target the whole half.

Its a fact they'll lose the next game now I've cottoned on to it! But its definitely worth €100 of my money. Laying whoever plays Inter when theyre at home, in the league, for a set liability of €100. I did toy with the idea of an awe-in tactic, but theres always going to be that one day to kick you.

As with the rest of my previous failed football efforts, I'll keep it away from Betfair and on Betdaq, we'll see how long this one lasts, hopefully longer than the other goes.

Also, for anyone heading to Naas tomorrow, its lashing snow in Kildare at the moment and sticking pretty heavy, unless it stops soon I'd say the meeting is in serious doubt. 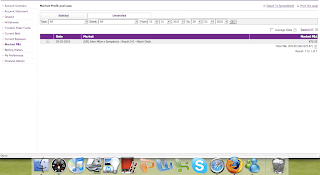