Hugely frustrating afternoon on the Saffers. India posted 298 (I'd small bet on over 300 too FFS), market was evens the pair, made it around par, so watched the first few overs to see what happened. Saffers go down to the 1.3s! Two wickets gone and back to evens, so I'm involved. I've a long list of complaints.. ABs shot - woeful for him, Petersen not running his bat in - SEETHING because I thought it wasnt out, could of controlled the book but was expecting "not out" on the big screen, up pops out and the market goes from 1.8ish Saffers to 1.6 India. Then Albie Morkel comes him, Kallis still there on 60 odd, so I support them and hold onto my position, Morkel plays across a straight ball missing and its LBW, its 1.25 India and its goodnight, thanks for coming Stephen.

Could of done plenty of things better, that grounded bat decision was a real kick in the balls, I was grand before that, it completely changed the game. Anyway, these things happen, more I think about it, the more I'll annoy myself. Was left with one of those hope and pray books..

And to annoy myself even more, Kallis stayed there, they needed 120/96 (which generally appeals to me more times than not), so I laid a bit of the 1.1s and lost an extra few quid. Kallis had a good knock, seriously pissed me off with his use of the Powerplay though, the RRR went up while they were in it FFS, then he got out, and they end up losing by just ONE run, one poxy run. Ahhhh. One of those games to forget.

I'm full sure Saffers should have won that game, full sure, but anyway. Whats even more annoying for me is that I spend all week winning €220 and then go and lose €250 on Sunday, more than annoying actually. You make ground, then BAM, back to square one.

Anyway, its not the first time gambling on something has annoyed me and certainly wont be the last.. onwards to next week. Highly recommend the song below.. 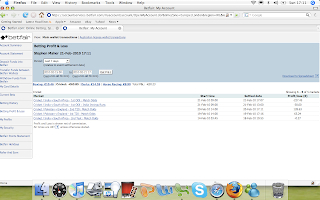