Nackered after a day in the exchange shop, went OK and no major scares. Dessie Scahill called the wrong faller in one race at Fairyhouse - matched at 1000, nearly chaos for someone (not the first time Des has done it either), went to a low of 1.6ish before getting chinned on the line. Yours truly backed it at 90, 60, 30 and 21 but did I go awe-green? Nope. Dont regret it in the slightest though, thats racing, I took my chances, I backed my opinion, I was wrong this time, thats no harm, I've no complaints.

That was the one major event, rest was run of the mill racing really, I do have a problem in the sense that when I'm at home my mind is programmed to be delighted with a €30 or €40 win, I generally "aim" for €20, being behind I know if I aim any higher theres a fair chance I'll get burned. When I go to the exchange shop, I start 40 quid behind, so my normal 'fantastic' day doesnt look so fantastic, making that leap from winning €40 mode to winning €100+ mode is fairly difficult when youve been doing the first one for a whole year, I cant just flick a switch you know. The best thing about the exchange shop is though, its very difficult to lose, bar I do something really stupid, I dont take that many chances and its hard to lose. Its still the same for winning, its hard to win, it isnt easy, its just finding the times to click. And also, if I move up a level in stakes aiming for the €100 rather than the €40, will I have the same thinking, different money levels makes you think different.

People can argue that point, look around at all the "practice" and "training" type blogs, but €10 liability is a lot different than €1,000 liability when youre looking at the screen. Would I have a tenner on something without thinking? Yes. Would I have €1,000 on something without thinking? No! I'd twitch at the grand, I couldnt care less about the tenner (I'd never bet €1,000 in running mind, just an example). Also, whats better for me, stay at home and win €20 from being behind, or go to the exchange shop and win €60 minus the €40 from being in front. Some races, its easy, its handy, its effortless. Some other races though, I find myself doing the exact same thing I'd be doing sat at home. It works both ways I suppose.

Dr Whizz was hugely disappointing today, hes a horse I really like, ground went against him and he didnt get an ideal ride off McCoy for the type of horse he is. Hes a Russell/Carbs type horse, sit there doing nothing and wait until after the last, Russell did that with him in Leopardstown and Patrick did it in his bumper. McCoy rushed him up to try and take the lead turning in today, it was never going to work. Winner was impressive though, but Dr Whizz in a handicap in Punchestown at the end of the season at 10/1 or so with a quietly does it type jockey on him, I shall be ready..

Australia went the whole summer unbeaten this morning in the cricket. Warners innings was class, although you'd question the bowling. I said here ages ago Australia would win every game against the West Indies, they won the ODIs 4-0 and the T20 2-0. Now Stephen, why didnt you back them every game after you said it? Because Sir, I'm an awful eejit..

I did back them this morning though, better late than never. 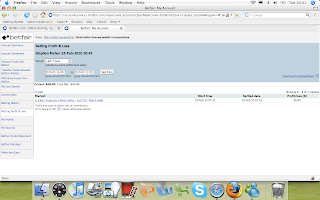