I wish they'd put on a Prizefighter every second week or so, 7 fights in 3 hours, what more could you ask for sure. Was hung, drawn and quartered by the knockdown in the final though, last round and I had Flournoy two ahead, well, not until he was sat on his arse. Only loss was that turn around, apart from that was fairly good, low liquidity in nearly every market so big swings, the downside is if youve big stakes and it goes arseways, theres little you can do to get out, setting the staking as to not to panic proves handy enough. Pity about the knockdown but still a good competition to bet on as it always has been.

Woke up this the morning thinking France were absolute certainties - bombproof. Max bet. Then watched RTEs buildup and laid it back. They all went with a France win but with a tight game, Les Bleus are a bit flowery at the best of times so backed out (then it was 20-0 at HT!), the boxing was on too so didnt want to be left worrying over two things at the same time. They went from 1.4 to 1.03, then back to 1.4, who knows what I would of done. Dont regret laying it back anyway. I'll cry if Ireland dont beat England tomorrow, if we cant beat that Johnson team we might as well pack it in sure. Not dead keen on backing at SP though, would rather watch the first 20 minutes, see what the story is and go from there. Think the market will be in love with England for most of the game, has been for the two England games previous.

Tomorrow we have a full racing schedule, Premiership schedule and all the footie lower league games that goes with it, two Six Nations games, the winter Olympics and a ODI Saffers v India.. I go 1.4 a crash! And ya wouldnt lay it would you! Hopefully we get through everything anyway, and if it does indeed crash hopefully its only for 10 minutes or so and not while I (or you!) have a bet on. I've no faith in them getting through but would like to be proved wrong. 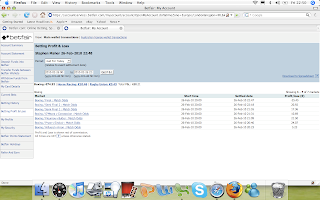