Look what happens FFS, I go away for a few days and the whole place is in utter chaos..!

Denman falling. I'm only guessing from what I've read that there was a huge meltdown on the Betfair forum. The RP have blogged about it giving them stick and one newspaper went as far as to call the Betfair community "a vat of bile bubbling away" today. Er, you know, its very harsh on some, but then its fair enough on others I suppose (the name callers etc).

Anyway, a couple of points on Denman..
1) Hes not a stranger to a couple of slaps down the neck going down the back straight, its happened before, it'll happen again. In all likelihood he would have ground out an unimpressive workmanlike win. Hes not a Dunguib, he doesnt do things slick. But sure youre guessing either way.
2) He finds a huge amount for pressure and responds until he has nothing left, I suppose thats one of the reasons hes had heart problems. You cant say he was beaten 100%. It was hugely disappointing that Niche Market was so close at the time of the mistake I know, and in fact making a little ground. Again youre just guessing, my honest answer is I dont know with leaning to a ground out win for the tank.
3) Hes fallen before. Aintree. In fact, it was the exact same guessy fall, takes off a mile too early, goes through the fence. No chance of staying up.

If you watch every race for a whole week, you soon lose count of the amount of horses that put in a short stride when asked for a long one, that get booted into a fence but come up too soon. The jockey is there to organise them, to guide them, to direct them, but its up to the horse to get from A to B isnt it. Why didnt Carberry get Harchibald to find for pressure if it was just up to the jockey? Zaarito has fell with four (yes 4!) different jockeys on board, mainly due to the fact I think he trys to injure them and they cant ride the next time he runs! Its hard to blame a jock for a horse falling.

I'd also like to say that people forget the dangers jockeys put themselves through, this morning we lost an absolutely super bloke called Ronan Lawlor, he worked for Pat Fahy and David Wachman. The horse bolted with Ronan on, threw him off the side and he hit a timber stake after falling off. Everyone is gutted you know, he was a lovely bloke, rode winners. Jockeys weigh 7/8/9 stone depending, horses weigh a tonne, yet people expect the jockey to do everything, it doesnt work like that, you need the horse to do the work.

But people lose their money, you have to blame someone, youre horse lost, blame someone. And thats what happens. This gets highlighted because its big names in Denman and McCoy. The press reaction is a bit strong handed and theres still plenty of seethe on the forum over it, but you know on there every race is a fix, every jockey is cheating, every loss is the jockeys fault, every trainer is putting you away, every trainer is lying, every TV presenter is a muppet, every tipster is a loser and useless and everyone with an opinion that differs from yours is wrong. There the forum rules arent they.

The problem lies where, when someone does actually try to be nice, have an opinion, a view, whatever, he gets shot down. He gets called a muppet, a mug, they even go as far as call him a cunt. Having actually made the effort and getting a roasting, he doesnt go back, or he goes to their level. And it goes round and round in circles. Everyone moans of "non-triers," but the triers on the forum are hunted until killed. As I said to someone, if you put up the cure for cancer, someone will still shoot you down. Its a fact.

It wont change though, ever, because were all different, we all see different things, fancy different horses, do different bets, if we all agreed, everything would be 1.01 and no one would get matched. Having said that, if everyone was stood face to face there'd be no rowing either, people hide behind anonymity.

I cant see what McCoy did wrong. But the forum needs someone to blame because the horse lost, so McCoy cops it. If it was Ruby, he'd cop it. When Sam Thomas was unshipped in the exact same fashion in Aintree, he copped it. And when the flats back, Johnny Murtagh, 'Frank' Spencer and KF will cop it for something different every day. Thats just the way it is.

Why does everyone row though?

"I have often wondered how it is that every man loves himself more than all the rest of men, but yet sets less value on his own opinions of himself than on the opinions of others."

It shouldnt matter what anyone else thinks of you, it does not make you right backing a horse though, sure were all wrong no ones perfect, but you have your bet, you back yourself, and who gives a flying fook what anyone says, its your money. And likewise when someone disagrees and backs a different horse, thats equally his choice, and his money. And its all a birra craic sure..

As for my money.. have two assignments due on Friday and a presentation (bugger!) also on Friday, so no betting until Saturday, then have a total week for gambling though, will sort everything out with a week screen shot Saturday or Sunday sure.

Also, completely off topic but, someone post the head in hands man for Ashley Cole! 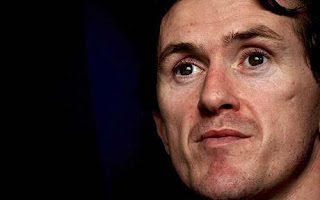