Feck me they really have it on the darts dont they! The market moves quicker than a Dublin fan leaving at half time in Croker, only when they play a team out of Leinster now (wink, wink). Anyway, having looked forward to it all day, it wasnt boring, but it wasnt interesting either..

Baxter v Jenkins - Draw. Had zero on the draw. Pants.

King v Lewis - Laid King at 3.3 for €25, then switched and laid Lewis at the break feeling that King would come out running, hes a fantastic front runner when he goes get going on a run, got away with a small win.

Barneveld v Wade - Jaysus they were brutal! Even the crowd started the Mexican wave, shag all else to do, Barney never hit a 180 or 140 for the first four legs yet found himself at 3-3 at the break. How? I've no idea. Had laid Wade, seen Barney, think balls, laid Wade at 2.2 went awe-red at 1.95, laid Barney at 3.6 went awe-red at 3.1, went to make a cup of tea and stand in the kitchen, peering in to see when it was over. I'm afraid of computers when the screen is red.

Whitlock v Taylor - Still to go, Taylor has man flu, but Whitty first time in front of such a crowd on PL debut, hard one to call, I'd lay Taylor with the man flu thing but you know I dont want to back against the daddy of darts.

Couple of points..
- The delay on Sky is massive. You know theyve hit or missed by the market before they throw. Nigh on happens in every sport I know but its just less than helpful isnt it. Especially in markets when theres little liquidity and such big gaps in the prices.
- The crowd was the most quiet I've heard at a PL, they said 10,000 were there.
- The brunette walkon girl has great jabs. Fantastic.
- Having used Gruss down in the IFSC, home is slow compared and for a sport that moves so quickly, its hard enough, I'm not a fan of the short format when theres not as much time for thought in the market.
- The short games dont exactly suit me you know, no real flow, no momentum, quick changes, quick moves. For someone who likes to run positions and gambles more so than trades, that doesnt help when things go tits up after going somewhat right. Be good if you were an out and out trader calling it right though.

Spent all week looking forward to its return, and its a good birra craic, but for gambling, I wont be going out of my way to stay in on Thursday nights. And wont go over €125 liability.

Anyway, I'm off for a few days tomorrow so no gambling. I want to gamble (obviously!) but its Valentines and you know if I did have a bet, it would probably be the last one I'll ever have. She might be small but even after five years she still scares the bollocks out of me when shes angry. Ah no, Betfair is banned apparently where were going. Back midweek. First winning week for five weeks by the way, BOOM! Everything in running, not much on, but I tried. Even though €40 is tiny compared to other people, I'm delighted you know, first winning week for a while, just to end the run more than anything. Won 20 odd quid on the Australian wallet there Tuesday too.

I cant remember the last time I had over €200 on something, its one of those periods in the year when I've no strong opinion on anything, meetings called off, cricket Australian hours, darts too fast, dont bet on footie or golf, not a big tennis fan. No point setting a daily target (I never have one by the way) when I cant reach it with whats on, people say making 1% a day is easy.. not when you dont wanna bet on Afghanistan v Kazakhstan U19s! Having said that, Friday, Saturday and Sunday are normally the main days of the week I suppose. I wonder if you took out the weekends, how big of a difference would it make to your betting? Ah fook it, I'm just delighted not to be losing!

Skys new darts tune below, song for the gym.. 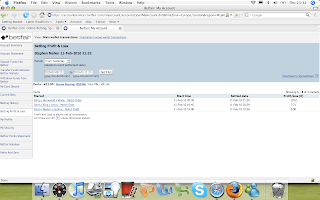