But I NEVER seen anything like what happened tonight.

Everyone was laughing at Zimbabwe at 0/3 after 3 overs, yes 0/3 after 3 overs of powerplay! Never seen that before. Struggle to 105 all out. Windies begin the chase with the market switching between 1.01 to lay, 1.01 to back. Cue a total and utter meltdown by Windies to end up getting beaten finishing on 79, 1.6 million matched at under 1.05, 200 matched on Zimbabwe.

I ended up winning €65, laid Windies 1.11, greened out too early for the jackpot, actually couldnt believe what I was seeing, didnt think it was possible or I would of ran it you know me. Just mental. I feel for the 1.01 backers, but they did have plenty of time to get out if they were nervous, the first wicket didnt go until they got to 21, market was at 1.03/1.04 for ages. As John Francome says, if it hasnt happened yet, it'll probably happen in the next two minutes. Never seen anything like that in cricket. 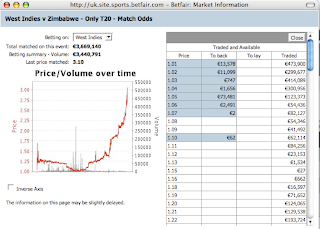 You know I was just thinking to myself at 5 bells, bugger I've to update the blog but I've nothing to say cause nothings happened today. That idea went out the window.

Anyway, that brings an end to February, thank god, its been an awful weird month. Finished level nigh on every week, or I'd win €40 one week and lose it the next, found it seriously difficult to make any money. But some moves, bets and trades have gone completely pear shaped at times and I'll never complain about finishing level. If I can finish level when things go pear shaped, I'll take that you know, it doesnt pay bills but its better than losing. Glad to see March come up on the calendar anyway!

This week probably sums up the month to perfection, made two bad moves in cricket games and lose. Win on every other sport, every other cricket game traded bar two and finish level. It could of been a different matter had I stuck to my rugby bets but I changed my mind for a reason at the time and c'est la vie. Again you know I cant stress enough how much I cant complain with being level. The idea is, finish level through the bad times and then its all profit through the good times, its a fact I wont win every week and its a fact I wont win every month so its just a case of not losing the head when I'm wrong or get stupid breaks of bad luck at times. February has been a disaster for the stuff thats happened me.

Looking forward to going down to Apple to sort out this betting computer tomorrow. And its also the blogs birthday on Tuesday, Tuesday last year was my first day betting under Gambler Falls. I'm no good at summing up things or stuff like that, I dont want a year summery to sound like a lecture of what to do you know because everyone has different ideas, I'll try think of something to mark it anyway, leave it with me. All cakes, cards and nude photos by text (if youre reading Ashley) sent to Maher towers will be accepted.. 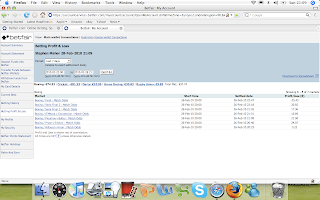