Wouldnt be a Friday night without the bloke whos odds on at the bell not winning! Was extremely close though, so it was hard to question it (was 1.8ish), cracking fight.

I'm still unconditionally and irrevocably in love with one click betting, its amazing, it just makes my life so much easier. Pity I never had it until now but sure whats in the past is in the past. Still setting up different custom columns every day, hard to set the price right compared with the amount for the timing you know, need nigh on 10 customs plus the market to have the choice of everything. Then I might have say €50 at 2.5, when really I only want to bet €20, hard to gauge it at times when setting them up. Love the way I can leave notes on every horse though, before I'd go through the card, high trader/low trader marked on the RP or piece of paper, now put a note on the horse and it stays there forever - meaning more time in bed, result. It wont let me put the Timeform squiggle beside the English cricket team though, seething. And another small annoying thing is the stakes at the top, I'd love to have different sets of them, for example the horses IR I'd have €2, 5, 7, 11, 22, 33. Cricket €20, 50, 75, 100, 200, 300. Then the boxing tonight I have them in between sort of way going up in tens. I'd love to be able to flick between sets of them rather than change them for every sport and market. Still great overall though, refresh was at 150ish tonight which was pretty slick. 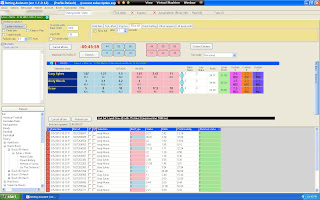 Didnt get to do the horses properly (only seen 3 races) or the cricket today due to having a presentation in college. Went alright, she was a bit of a wagon though, everyone who had poor attendance was hung, drawn and quartered for no reason regardless of the presentation they gave, bit harsh, she picked on quite a few groups who were good I thought. I had to laugh though, some of the foreign lads spent weeks doing it, had it finished before last week, when did we start ours? 11 bells this morning. It was due for 12. Why didnt we go in at 10? Because we all agreed on having an extra lie in. Never ones for panic the Irish students..