Just back from Navan, needed a day away from the Betfair screen, yesterday was another -€75 day. Thats Wednesday, Thursday and Friday all -€75.. at least I'm consistent!

Confidence is a funny old thing, you know since that Punjab market on Wednesday I've doubted everything I've done. Not confidence in the sense that you think every bet you'll ever do is a certainty, and then blame the jockey or whoever else suits when it loses, just normal confidence in the sense of having a set of balls and a bit of bottle to back yourself, instead of doubting yourself.

Yesterday I had €300 (first max of IPL3) on Rajasthan, the price hovered around the same mark for a while before briefly drifting. I bottled it, lacking belief in myself, went awe-red, Rajasthan won, a 1.01 train. Pants.

The boxing was similar but Webb got an almighty cut over his eye which did for my betting ideas, laid Small (what a cocky twat he is by the way!) at 1.2, went awe-red at 1.14, Webb won (Small hit 1.02 when the doctor was called for the cut), it was an awful fight to bet on though because under British rules if youre stopped for a cut even though it was a head clash its kaput you lose anyway. I was happy enough to be small red at the time given the doubt of him being stopped, but its still a losing market having backed the winner first up.

The horses were a bit more simple, just a losing day, no rhyme or reason, just a losing day in running. Couldnt do anything right, I found this almost god like knack of laying a fast finisher for 3rd in the place market. Just have to put it down to one those days not being at the races or whatever.

Anyway, badly needed day away from the screens, no harm done. I was just flicking through records there when we got back, I was on €19,636 on the 27th of January and now on €19,588 on the 27th of March. Next winter I plan on becoming a small Asian boy making shoes in Calcutta, I'll make more money then and shall return for the flat!

Ah, as I said before, no harm in not losing and its all for the craic sure. I'll be in Leopardstown tomorrow, few odd jockey bookings I know but its all purely based on the ground and trip for tomorrow. You'll Be Mine is still (at this moment in time, before she runs) number one for the Oaks, tomorrow is 7F you know. And Viscount Nelson, I keep saying it with him, he doesnt run as good as he works, I'll give him two more runs and see. But they'll all need the runs to some extent and its still only a watching brief for me, sure its only March.. 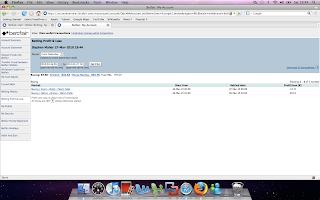