Now, I'm not normally one for these guessy type bets pre-off on cricket. Top bowler/Top batsman. But Sulieman Benn tomorrow at 7/2 to be top West Indies bowler seems more than fair. The Zims looked like they really didnt have a clue against him the other night in the T20, his figures read - 4 overs - 2 maidens - 6 runs for 4 wickets. In T20 thats basically, er, you might say impossible, if I didnt see it I wouldnt believe it you know.

Small problem is I'm guessing what the pitch will be like tomorrow (it mightnt suit spinners) but Cricinfo, who I stress cannot be trusted, say this: "A contributing factor to the dry, crumbling pitch used in the Twenty20 in Trinidad is the drought which has gripped the entire Caribbean region since October - usually the wettest month - and Guyana has certainly not escaped its effects. Expect hot, dry conditions and another cracked, spin-friendly surface."

That seems like good news, Windies dont have too much spinning fire power bar Benn and as I said they really looked absolutely clueless against him the other night, he opened the bowling, in the powerplay, they were 0/3 after 3 overs. I'll be SEETHING if the Zims give away their wickets to a seamer swinging if Benn has picked up 2 or 3, they swing and give some jammy seamer 4 wickets being caught on the ropes. Its worth 50 quid at 7/2 anyway..

Just went AWE-IN playing Omaha poker thinking I had a flush (clearly dont know the rules then), but won with a straight (which I didnt know I had either). WHOS THE DADDY! The funny thing is, some people seem to think I'm shrewd at this gambling lark, I'm just a jammy fooker! Anyway, I've read wikipedia and I know the rules now so this time next year I'm gonna be a millionaire.. (Poker was only €1.40 by the way, think I'll stick to those stakes for the time being..!)

Video clip is brilliant.. "so thats just over 3 million each" .. "well, weve had worse days." What a show.. 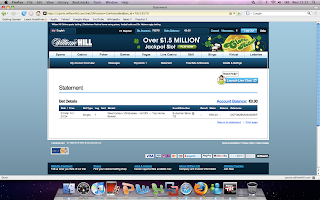