Well, depressing scenes last night in Old Trafford. Out of the Champions League, small chance of winning the league, out of the FA Cup, lost the last 3 games in a row, press blaming poor manager decisions.. I've never felt more like a Liverpool fan in my whole life. Fook it anyway sure its only football, doesnt matter when theres no money on it.

Been a slow last two days for gambling, I normally take Mondays off to spend the day with my Grandad but with this Monday being a bank holiday, I took today to go see him. Nice to see Big Bucks to the business again though, what a horse.

Fiddled around on the cricket and horses but nothing too major. Yesterday, won on the first game, lost on the second, has it ever happened before FFS, cant get a 2/2 for anything, but all good games to watch so no real issue, win some lose some. I only had mobile broadband for 2/3, the one I had fast internet for was the one I lost on funnily enough.

We had a heart rate monitoring doctor down in Ballydoyle yesterday morning, the normal resting heart rate I'm told is between 60 - 80. Mine was 54, he said that was grand, just means I'm fit and more relaxed than most. Then he put me "under stress" running and a few other things to test certain situations, and my heart rate rose peaking at 89. He said that was almost unnaturally low for a person under stress, he asked me what I did, I explained I gambled and didnt have a 'proper' job. "Ah that explains you, no real stress of a working man then" .. "No Doc, I'm just used to absolutely shitting myself every day." Has he never seen an IPL game! Nice guy though, at least everyone knows they wont die now.

Fantastic excitement with Tiger coming back tonight as well. Went into Ladbrokes on the way home tonight and had €50 on him at 6/1, dont normally bet on golf but couldnt not do it, how long has it been since Tiger has started 6/1 sure. 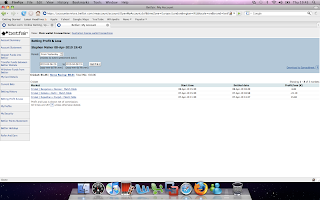