Still pissing myself laughing here, a special Friday Fight Night DRAW.. has it ever happened before? Dave Paris had Sexton winning by four rounds, so bad its untrue, cant even explain how bad it was to people who havent seen the fight. The other fellow was matched at 1.05, dont forget this is the same Dave Paris that is ALWAYS involved in the Friday Fight Night draw special. The other judge had Bayaar by four rounds and the third judge had it a tie. As I've said before, you know if its in any way close and they score it to maybe say a round or two, well fair enough, but four rounds when he had the shite knocked out of him for well over half the fight.

I've learned the lesson numerous times to never leave red on the draw (countless times on the blog too), so got away with a €2 win. I feel genuinely sorry for the 1.0x backers (or any price for that matter), theyve been mugged, and the only reason I know to cover the draw is because I've been there before myself and its not a nice feeling. But you know, 'fool me once - shame on you, fool me twice - shame on me' it wont happen me again after the last time, and hopefully it wont happen others again if theyve been involved tonight. Its a joke, it just drives people away from the sport, you'd nearly be better off backing John Higgins FFS.

Still cant believe the Aussies won today either, unreal, hard to put words on the innings, Hussey said at the end it was the greatest feeling of his career, most amazing scenes I've seen in a while anyway. Didnt fancy them getting there but had a small momentum lay in the last two overs when they needed 17 an over to grab €25, I just wanted to be involved if they did it more than anything. 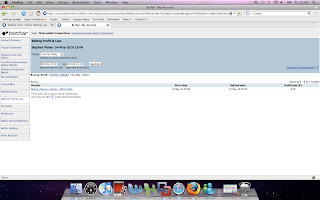