Team A post a big score and go into the 1.2s, team B lose an early wicket to the new ball and Lumpy pushes it into the 1.0x's but they end up chasing it with overs to spare on a flat pitch. Has it ever happened before I ask! Its like watching an old film at this stage. I dunno who held the price at 1.2 - 1.3 when they needed 130 off 90 with only four wickets down and two set batsman, but anyway, to use a Betfair forum phrase, CLASSIC PRO40 market. Its pretty shite that Sky wanted to do away with it and because teams complained and kept it, we only see it every weekend when theres no international cricket for Sky to show, better than nothing I suppose, last few years it used to be on every evening though.

Must also thank the Sky comms for spending half hour at the break saying "no one has ever chased over 301 at this ground in any limited over game." Well, heres a game they chased 340..

Well done lads, thats great stuff. Its like presenting in college, never let the facts get in the way of a good stat. Gloucestershire also chased down over 301 in the same competition just last year FFS (innings SP of 1.05 busted), they get paid to tell me this shite. If I didnt check all that stuff beforehand I'd be seething, and no real reason not to believe them either like, can never listen to anyone on TV these days. Speaking of which, who the fook let Rishi back on RUK? Its a job for him I know and good luck to him, but he just does my head in, I cant listen to him at all. Dont mind the others so much, I never listen to what any of them say mind, but just to have it on in the background rather than sit in silence between races you know, I just have to turn the sound off when Rishi speaks for some reason.

I said I dunno who was holding the price in the cricket between 1.2 - 1.3, well I dunno who was backing Mitchell at 1.55 in the boxing either. Katsidis was defending World Champion, only been beaten twice against World Champions, and spent three months training in Thailand before tonights fight. I know Mitchell had home advantage but even still, I thought it was more a 50/50 fight than a 65/35 fight (leaving out the draw) as the odds implied, I laid with a view to hoping for a flip flop and green up, but he knocked him out in the 3rd so that was alright.

Tough fight tonight, I like Khan, for his boxing skills more so than his ego, but Malignaggi isnt a big puncher, and in all likelihood he'll hardly out box Khan, 1.18 is crazy short though but even so its hard to see how he can actually lose bar a knockout, I know he has a glass chin but Malignaggi still might not test it. Best fighter hes been in the ring with so far so we'll see, gonna try stay up for it anyway. 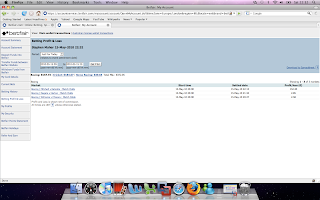