Another cracking day following on from yesterday, nackered though, had just three hours sleep this weekend. But sure like, only 24 hour gambling weekends are for lightweights.

Sad to see liquidity so low on the GAA today, first day back so we'll see if it improves, theres money in the market alright, but it seems the low odds bot layers have cleared off and "normal" people watching the match are left to make the market. Some people dont like bots, I dont mind them, at least they make the market look a bit respectable rather than just blank half way through..

For position takers like myself, theres always gonna be the one day I'm completely hung, drawn and quartered with no way out, but sure fook it, I'll worry about it when it happens. More money in the market, the more of a safety net there is for getting out though. I blame Betfair totally 100% for not suspending the market on time, each game is left open for about half an hour after its finished, minority sport so they dont give a monkeys, so I dont blame people not wanting to leave the low odds lay up. If you look at every other market though, theres always a couple of grand at 1.01, no matter what it is, its always there, not GAA though, because in all likelihood the only time it'll get taken is after the final whistle. By the way, this new hand-pass rule is absolutely gash, it makes NO sense whatsoever, we had 50 frees in 50 minutes today FFS! I cant comment too much because I dont even understand the rule, it looks like normal to me and not surprised the ref got plenty of stick from the crowd today. Overhand - Underhand, its all a load of shite in my opinion, just get on with it and pass, throwing is different alright but passing is passing whichever way you do it. Its gonna cause so much hassle this summer.

I stayed up all night for the boxing last night, weird feeling going to bed when the sun is coming up, only time that happens is when youre drunk but when youre sober its awful hard to actually go asleep. Huge issues with the settlement, Betfair *thought* it was a 12 round fight, but it was actually a 10 round fight, everyone in America knew that, everyone there knew it, I presume the fighters knew it, but Betfair didnt so they wanted to void the market afterwards. Go the distance and round betting was voided because they had 12 rounds in the T&Cs, but my argument on the phone was it doesnt say "12 rounds" anywhere in the T&Cs for the match market odds, it just says "Predict the result of this fight." They held back settling all day but have settled this evening. Cricket has 5 overs a side in T20, football has 90mins, tennis has one set - if they want a rule for 12 rounds all they have to do is put it in like the rest. They might end up doing it actually because they voided every other market, they just couldnt void the match odds because it said nothing.

Fair play to England today too, T20 World Champions, they were perfect. KP played like an absolute god and rightfully got man of the tournament. It was a really good trading market because theres was so much money in the market that normally wouldnt be there, people watching and overreacting to wickets/boundaries, good banter on the cricket forum it has to be said as well, the football forum invaded with England playing (you know what theyre like), they had it GSM'd after three overs, then seethed when it flip flopped (Aussies are never beaten!), then decided that England were shite when they won and it was only because South Africans were playing that they were winning. Good craic all around. You know, an Englishman only scored 12 runs out of the whole chase, but it is what it is, if it wins you money who cares. Think its a sign of the times though, different people moving about, I remember having to get the bus early one Sunday morning and I swear I was the only Irish person there.

The womens game went alright too trading in low odds the whole game. Staying up all night Saturday to bet on boxing, betting on womens cricket on Sunday night at 12-00.. "you know youre addicted to gambling when.."

Been a good weekend though, I was minus €17 on Wednesday, a little over level by Friday, and end up winning €650 this week. Didnt sleep though, looking forward to taking tomorrow off, dont like the nighttime hours at all. The only mistake I made, well it wasnt even a mistake really, was backing pre-off at York, wanna cut out the pre-off a little cause its the only negative at the moment, or at least limit staking, because when things click in running its obviously much better for me. Getting rid of ATR in running has proved such a success too in little time, €100+ from in running on the horses, knocked back by pre-off bets. The other three sports are ones I naturally love and even though I didnt have time to sleep, it was really nice to have them all on you know. When those sports click, they just click and its easy, its trying to finish level when they dont click thats the hard part. 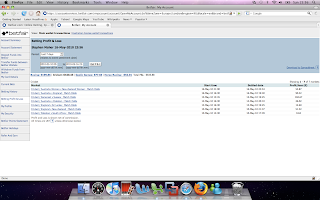