Raining at the cricket so nothing else to do, worst thing about tennis and cricket must be the hanging around waiting for it to stop, its not like you can wander off either, I'm waiting to back Australia when they start. By the way, three Englishmen, a Irishman and seven South Africans walk into a bar.. and the barman says "shouldnt you guys be preparing for the final?" Ah, I'm delighted for England really, amazing the difference its made to open with hitters rather than the usual slow start, I'd love them to win it now, but Australia are brilliant, hard to see them beaten.

Anyway, minus €17 since Monday, crickets been good, horses in running been good, little mini disaster pre-off at York Wednesday though. The filly beaten, the sprinter beaten, and then back to Naas to see the 2yo in the first beaten. I had a good cut on Starspangledbanner, and he ran alright without being good enough, so you know, what can you do.

There was three fancied ones beaten, then Cape Blanco goes off without a cent on from anyone, and wins easy, you couldnt make it up like. Not fully convinced by the form of the Dante though, Coordinated Cut was coltish in the parade ring (how he had his lad out when it was full of colts I dont know, gay horse!), Chabal was beaten before they turned in and doesnt seem as good as they think he is, and Workforce hung and had his head all over the place. So, the race just sort of fell to Blanco, he won it by default almost. Bit like Kauto Star in the King George. He clocked a fast time but the ground was firm and every race on the card was fast, he was still behind Sariska on the clock, who was only half a second behind Sea The Stars' the track record, quick ground I reckon.

Delighted with him winning though because, from my point of view, if stablemates are the biggest challengers for the Derby sure were laughing like. I cant see St Nicholas Abbey being beaten, thats only my view anyway, but if hes going to be beaten its not gonna be by a stablemate, sure hes miles ahead and always been number one. When I look at the race I just cant see a horse to challenge him, Workforce didnt look too good Wednesday, the only horse whos an 'unknown' under 25/1 on Betfair is Bullet Train, winner of the Lingfield Derby trial, and the only reason I'm worried about him is because I dont know anything about him, rather than his form. Captain James Cook (RIP) was close enough to him before he broke down, and he was only a Dundalk maiden winner, Johnny said he thought he was going to be in the first two when he came back too, no reason for him to lie either because the poor horse is brown bread, hardly hyping him up. I'm looking forward to Epsom now anyway, I like all the build up you know, all the comments about hype, oh he finished 6th in the Guineas, he wont stay and hes no good, all the rumors. Good banter.

Took the end of the month this morning too and the only thing that was a loser was the horses pre-off. I have to look at what to do with it, bit confused basically because how can you change it really. You back your opinion and win or lose, thats about it, so how can you change that. Cricket showed a healthy profit, boxing chipped in and the horses in running was over €400+, which I was delighted with because I was struggling a bit there in the last few months, I just changed it ever so slightly, stopped betting on ATR English meetings. Something simple thats worked, excel is worth its weight in gold really when you think about it because it flags up all the stuff I'm shite at so easily.

EDIT AT 18-30PM: Pakistan bat first and post 191, feck backing Australia now. Always think Pakistan are better defending because their bowling is the strong point, cant remember the last time they got runs like this. Suppose thats why theyre in the 1.4s, which is way too high to lay, dont wanna bet against Australia either though, they got 191 against Pakistan in the group stages and that included a five wicket maiden, epic run chase if they do it..

OH. MY. FOOKING. GOD. I cant believe they chased that. Needed 70 off the last five overs, thats one of the most amazing things I've ever seen. Last partnership was 53 off 2.4 overs, thats unreal.. 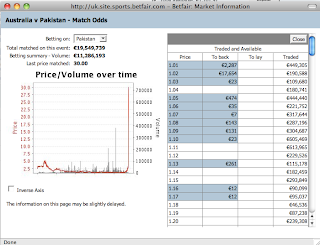 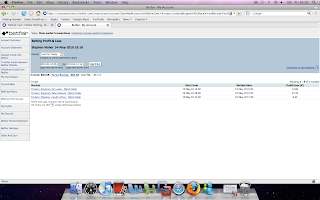