Heads a bit sore so I'll keep it short, exams finnish boom! Anyway, thought he ran a cracker yesterday, got a little tired towards end, he was a bit free with Johnny early doors but he really does have some speed.

Fancied yesterday even giving weight away and his main target is Royal Ascot, funny old thing is Betfair.. he drifted out to 8ish yesterday after Cabaret was beaten (from 5.3ish), I know stable form is important but its not THAT important, weird that people almost jump on bandwagons, thats all it was, 8ish/7ish was a fantastic price, ended up sending him off the 5.3 he was before.

Nightmare with the books though, hes 14/1 for the Golden Jubilee Stakes, max is 11 Euro, sigh. How and ever, I'd rather have a tenner on him than nothing, I'd like around say €50 but sure I'll work with what I'm given. I'm not backing him at 12/1 when I can get 14/1 elsewhere either, even only for a tenner.

Dont really expect Blanco to win today, needs the run, if he wins hes a machine, however Joey rode him work the other day, got off and said hes not sure he'll stay 1M4F, so Derby quotes might be premature even if he does win. Christ he'll have to be good to win though in that field first time, maybe the fact that Joey doesnt think he'll stay is a sign of how much he needs a run, I dont know bit of guesswork, we'll see..

By the way, lots of talk in the paps this morning about Zoffany being a wonder horse, but if you look at his times and the horses hes beaten, hes hopeless. Now, he could be anything as they say but I'd be disappointed if he was the best, think its just that fact that hes winning has people talking about him. Two that have ran that I like more are Samuel Morse and Together, she didnt run well last night but works well, was a bit green too, should come on for it hopefully. Watch Samuel Morses win at The Curragh, hands and heels, quickened up so well, he has gears.. 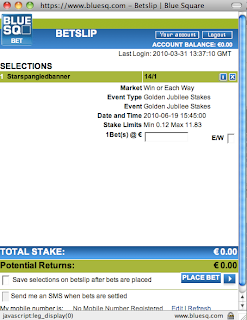