Another week of exams meaning I didnt get too much time online, not as much as usual anyway, and I've done some fierce stupid things along the way..

Its not really an excuse or anything like that, its annoying for me, I've been doing things I wouldnt normally do. This is my day - get up at 7-00, get the bus, exam at 9-30, finish at 12-30, bus home and then turn on the computer, because of all the fuss and bother thats gone on beforehand (and its only 1-30), my brain is fried. When normally nothing would be happening really, bar a jog or gym, something I'm used to.

I lost €96 on innings runs - something which I have a rule NOT to bet on, so what the fook was I doing on it! I lost €120 pre-off on the horses (mostly today at Leopardstown), thats a tricky one though because I still backed my opinion you know, I just lost, one of those things, but in the past few months I've been leaning towards in running and forgetting pre-off because its gotten more and more difficult, so now, when I lose money pre-off it gets on my nerves.

What has happened though is that "normal" people who work and come home to bet in evenings have gone up totally in my estimations, its a very hard thing to do. It seems stupid and people call me "lazy" because I stay in bed until 11-00 every morning, but like, the horses dont start until 2-00 and the cricket 1-ish/2-ish, so I wake up naturally, and it makes my life much easier, I feel better, its not laziness if you dont have to get up early why would you, people look forward to weekends for lie-ins. Its amazing the little difference of doing something and being made do something makes, I still sit down at the computer at the same time, but I'm not "ready" like I normally am.

And I've donked off loads of cash, not thinking things through, not planning, and betting on things I wouldnt normally. When youre tried your judgement is tainted IMO, every losing situation *seemed* a good idea at the time, its only when I look at the P&L at the end of the week I see that I was clueless. And without it I'd be winning, in running went well the days I did it for €110, the cricket match odds went OK €110 too, the boxing SP was 1.06 so nothing doing there, and the snooker was commission. The week ended minus €20.

Take out the innings runs bet and I'm up €50, I wont take out the horses pre-off because I backed my opinion, not happy about it but I backed it anyway. Discipline is viewed in a wrong way by many IMO, discipline is seen normally as chasing and big bets and whatever else, but I dont view the horse pre-off bets as poor discipline because thats one of my sports - I just backed my judgement on my sport, it might not have been ideal but its still not poor discipline, its a poor bet. Compare that to the innings runs - that was shite discipline, somewhere I shouldnt be, total mug, I was only there too because the match market was 1.02/03 (Saffers v Afghanistan) so there was no action, theres the addicted gambler coming out in me, which I am anyway no point lying, I just dont lose the head, thats the only difference between me and the blokes in gamblers anonymous.

Anyway, exams finish on Wednesday and I'll be glad to see the back of them, going well, just the last one to go. Focus on not doing stupid stuff then after. Its just I think the 'release,' of coming home after three hours and having a bet to relax. Thats gambling for fun, thats not real gambling. I've been suckered into that one this week.

Dont want to analyze it too much either though because I'll end up one of those people that never leaves the house, stays on Betfair 24/7, and a nerd who analyzes market history and gambling theory with no mates, makes colourful charts, gets a strike rate percentage and a rate of interest on every bet they make. There are enough of those people already and I dont want to join them, so I suppose its just about finding the balance.

Chilling with friends, having the craic, spending time with family/Ems and sports/gyming it too, those things are very important so that my life isnt just about gambling. Its nice to take the piss, not care and have fun, "work" when you want etc. Sometimes its just fooking horrible when I dont bet good and seethe, and dont think about bets and they lose, or do everything right and get fooked over (which always will happen in sport). But theres a lot more good things than negative really.

As I said, last exam on Wednesday and its a weird feeling at the moment, because everyone has all these life plans and stuff they wanna do, and I have no plan - at all. Even at home like, Emma has her career, shes always wanted to be a teacher, when we met at 16 thats the first thing she said and shes doing it now. I'm lucky enough to have paid the mortgage off already with gambling, so we only need approx €7,500 a year to pay the house bills - light, heat, Sky, etc, three bedroom with nice neighbours so if we never have to move even if we have kids. You know, I have a fooking fantastic life, swan around without a care and enjoy myself, but like, I dont want to get to 40 and its like "Where were you when that happened Stephen?" .. "I was on Betfair, 1.44 was a great lay at the time."

Its scary that everyone has these big plans, and my "plans" are to bet and survive basically. You know, I'd back myself to win €8k a year, whether its a good year or a bad year, average €8k a year and pay the bills, then Emmas salary pays for going out and food and stuff, so were pretty set for good things, not in debt and never will be. What happens if I wake up one morning and dont want to gamble or I'm finnish, or we have kids (kids cost money!), I dont want the lifestyle of work 9-5 Monday-Friday and get locked the weekend to forget about it, likewise I dont the lifestyle of dedication to Betfair (thats needed) to win 40k-50k a year. I dont know what I want, thinking about the real world scares me shitless.. I'm terribly lucky in life though, and I appreciate it, I just dont understand it, sometimes.

By the way, been playing PLO online a lot too this week to relax a bit, but I watch Ziigmund play the nosebleed stakes too because he has my view of 'not caring' a bit with the way he plays, but read this, its brilliant, no one likes Urindanger because he abuses them when he loses..

I believe the word youre looking for is.. OWNED. What a hero. 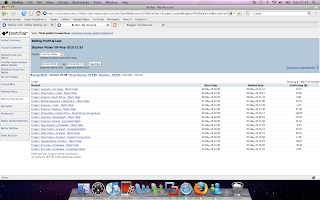