It Only Rains When I'm Greeeeeeen..

If its not pissing down here, its pissing down in the West Indies when were playing cricket! Seething for my book..

We had 'em at 13 needed off 9 on D/L for a game if they got back out, dont think we'd of won had they played the whole 20 overs though, pitch was a real tough one. Broke a rule today too laying the 1.08 SP for England at the start of the game - only a rain related bet though because Ireland won the toss so D/L would favour us when the rain came, actually quite ironic that the rain ends up buggering me. Got a tenners worth cover on the completed match market but that was it. Lumpy did his conkers leaving up 100k at 1.5 and 50k at 1.1, dunno what he was up to there really, it was always raining on TV, what was he doing FFS, in the kitchen making a cuppa? 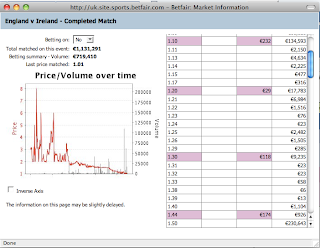 Anyway, they took the commission off the snooker and the horses chipped in yesterday but nothing major, was pretty busy, the exam went well this morning though so it was worth the last minute studying in the end. Pretty annoyed to miss out on that 70 quid there tonight though, only needed 9 more balls for a game too like, so close and so far.. 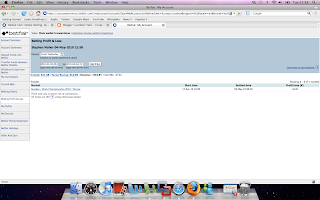