Best thing about the Eurovision? Marty Whelan SEETHING as every country called out the votes without Ireland. I actually got fecked over by them too with Spain getting to sing twice, some eejit jumped on the stage when they were singing and they got to go again last, they had the coffin box draw out second. Had to trade out after laying them top 10 because - chance of them getting double the votes, double the people seeing them, being on late and the sympathy vote. Still finished outside the top 10, just if they didnt go again it'd be €60 and not €12.

Anyway, hugely frustrating evening on Prizefighter, betting like a bit of a mug, it was probably the best Prizefighter theyve ever had. Every fight was stand in the middle and knock the shite out of each other, good to watch, terrible to actually bet on who was 'winning' because all fights both were landing solid punches and only one big punch away from it being kaput. Whatever about that, I still could have done better, screen shot at the end shows how bad I was, and I was awe-red for the amount every losing market.

If I'm not 100% I should sit on my hands really, I dont know, its not that I'm guessing its just when I actually bet because I'm 100% the slightest thing makes me change my mind and back out. Thats where the bad trading comes from basically, no conviction about it I suppose.

Every meeting from England during the day was on RUK and then Navan on ATR, all went grand, won no more than €6 on each race but it all adds up when the day is finished you know. Still havent decided on being depressed yet about St Nic, we'll get to Tuesday and then go from there, but as I was saying to people today, sure fook it like, being depressed over it isnt going to change the situation you know, its gutting because you plan two years and then might not get a proper run for your money, but sure we'll get to Tuesday and then worry about it. But whatever happens, crying and moaning over it wont change anything anyway so just have to get on with it.

Among the numerous bets I have on him all going from 66/1 before he ran to 3/1 after the others have been winning, I have €250 on him for the blog, which went on after the Dante if I remember correctly, the rest are in cash or elsewhere. Ladbrokes will take a massive hit from us if he wins, but everyone will tell you that they "know" so the truths not important is it! He still remains, what will be my biggest win ever if he does win. Its just, that cocky confidence that was there before, thats taken a solid, solid knock. Its gone from being "hes a certainty" to "I dont know" all because he 'only' finished upsides, 'only!' But normally hes well ahead you know.

I suppose too that the horse isnt a machine and maybe we expect him to do wonders every single time when if Jan Vermeer did what St Nic did Friday you'd be delighted, it'd be his best piece of work ever. He just doesnt become a bad horse overnight and it is possible there might be something amiss, or hes under the weather, or whatever, because that sort of thing normally doesnt happen, so you'd worry, but he'll work Tuesday and go from there, thats basically it. Hopefully hes grand and runs, because were fooked if were relying on the others, and anyway I only backed the one, it matters more when theres money on it.. 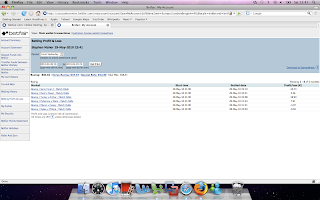