Whats The Word When Youre Past SEETHING?

As every Irish person knows at this stage, not a weekend goes by without Betfair bollocksing up something on the GAA.

Donegal v Down today, they never suspended until around 30/40 minutes AFTER the final whistle. I dont actually use Twitter but for some reason I put up that I was laying Donegal at half time.

So, my book at the final whistle was..

After a couple of trades during the second half, backing and laying the Donegal price (it went short before it went out again). I didnt back Down though. I dont actually have a screen shot of this because at the time I didnt know it was going to be important, but I do have Twitter to say I was laying Donegal, and NOT doing anything else, it'll make sense a bit down.. 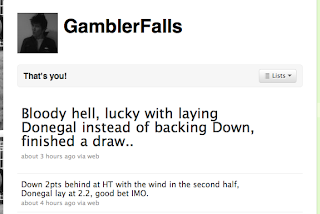 Now, they dont suspend. The games over, a draw. So I put up money at 40, 36 and 34 etc on a result.. on the off chance someone might take it you know, everyone does, theres a fight over who goes highest. That was taken. So then my book read..

And three hours later theyve voided some bets and changed my book to..

HOW!? I didnt have -€160 red Donegal, and secondly I didnt back Down so wheres my Down green gone. So where did that come from, they didnt even fooking know what they were voiding!

While I can see the "fairness" of voiding, my row is..

1) Not my problem people put money on. I just offered prices on the market as it was left open.
2) Not my problem Betfair didnt suspend on time.
3) Doesnt say anything about it in the T&Cs (by the way if you bet after its finished, dont worry we'll void - I dont see that anywhere).
And most importantly 4) You know when youre watching tennis or cricket and the market goes 1.01 when its over that split second before it suspends because of courtsiders - they dont void that do they, and thats when the games over too. Those people cant lose at that moment in time.

They didnt even know what they were voiding FFS anyway! When I rang them I was asked "Is this horse racing?"

"Some bets were void, but I dont know why its not my department, we'll ring you back."

As I said I do understand the fairness side of it but I think my four points are pretty valid too IMO, and that fact that theyve made up a rule just to suit themselves..

1000/1 to get paid though. They havent called back either. Besides, none of this would of happened if they managed GAA markets properly, but the rules say anyway "Who will win this match? At the start of play all unmatched bets will be cancelled and this market will be turned in-play. This market will not be actively managed therefore it is the responsibility of all users to manage their positions."

But we'll void if people are stupid enough to back after the final whistle.. not happy at all, says people should look after themselves in the rules and then void, it makes no sense. Also very important to remember that they dont suspend ANY game in the GAA on time.

I'm making a proper fuss of this one anyway to make a point to the dopey bar-stewards. I love a good moan and row over the phone anyway..