I'm still seething over the GAA situation on the first game, because they still havent given me a proper answer. You know, probably being a bit of a tosser over it at this stage but my point of view is, its not in the rules, theyre making one up, Betfair is eat or be eaten and people should be able to look after themselves. The courtsider argument idea is another I want to get across to them too, because its no different what I did to when they hit 1.01 before the suspend and if theyre not going to manage the markets properly then just dont bother. I'm being a Wayne Keir and not letting it go. You know, they didnt even void it properly, so they didnt even know what they were doing, making rules up FFS.

Anyway calming down, done the Saffer v Windies game this evening, missed the start but got the first wicket bounce. Can be fairly sure that Saffers wont fall in a heap against the Windies bowling so it was a nice trade when they were chasing. They had set 59/0 before I was involved though so the hard work, good start against the new ball was done I suppose, rate was handy enough so they didnt have to take chances, and the batsmen were reliable for singles (Kallis and Amla). Lumpy laid buckets of 1.4 - 1.5 so when he changed his mind with runs it went quickly into the 1.1s. Saffers didnt half mess around at the finish though, should of been much easier, thank god for AB.

Interesting finish to the test match tomorrow, and I reckon a lot depends on what Bangers do, are they playing for a draw? I'm guessing they are but you wouldnt know with that crowd. Then, they'd bat for as long as possible, which makes sense. But if theres cloud cover England could get them all out just after lunch, then say England have to chase down maybe 200? 300 if they whack it around - which Bangs tail probably will try anyway. 300 in 45-50 overs would be interesting, RRR of 6 is high for test cricket, can bowl wide, leg-side and put everyone on the boundary, plus the test team doesnt look as strong as the ODI team. Cook, Strauss, Trott and Bell dont exactly score fast, they dont get in the ODI team either, and I know its test cricket, but its a ODI situation if chasing 300 in 50 overs. I dont know what will happen, it all depends on what Bangs do more so than what England do I reckon. They could collapse all out for another 20 runs and then its GSM to England too. Tricky. I might miss a huge draw price but I'm fairly happy to wait until Bangs post a score, or if they just try to play for the draw then I'll probably leave the market alone.

Been a good week punting wise but obviously bit depressing with the St Nic news. I nearly say this every week, but last week I was shite and managed to scrape a small profit, then this week when I was good I'm not making up for donk losses when I'm bad. As anyone whos ever gambled will know, life is easy when youre winning, and shite when youre not, so staying level in the bad weeks is the most important bit to me and then the good bits will take care of themselves. Next week is looking likely to be minus €250 already, but theres still a little hope left I suppose. Nothing we can do anyway, its up to the horse now. 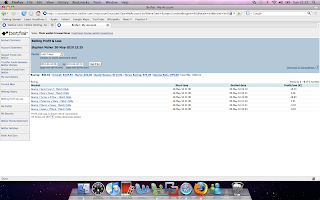