I know its after the event now, and prices after the event take on a whole different complexion, its easy to look back and say this, this and this, when its difficult to react at the time. But anyway, Australia were matched in the 1.2s today and indeed traded in the 1.2s for maybe a good six overs going from around 32 to 26 left mark, the weird thing about it was the RRR only ONCE in the whole game went over 6, and then when it did, they got 10 off the next over to bring it back under again. I know the 1.2s was a reaction to a wicket going (Aus were 1.5ish before and the market feels it has to go somewhere), but like, its under a run a ball, how is it ever 1.2!?

If someone said to you now England won by 4 wickets with 4 overs to spare with their batting lineup (T20 Champions!) with the RRR a run a ball for the whole game, would you believe Australia were 1.2? I was actually on England before Australia hit the 1.2, I was pretty much in the shit at that stage if I was a "trader" with a stop loss etc etc, better for me to have a max bet rather than a stop loss, as always my best bet is to go with the flow and feeling at the time, I'd have rather lost the lot than red out at that price. Anyway, been staring at the computer screen since 2-00 so bit of a headache. Worth it though. 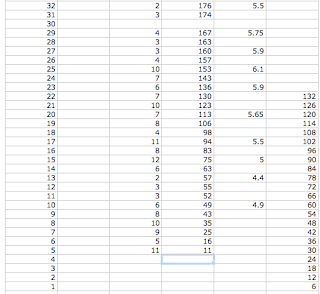 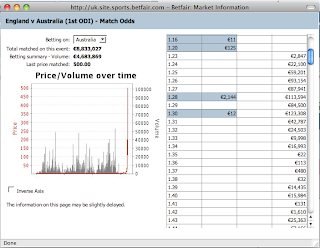