..Again, must be something in the water this week..

I'm still just under 20k from the chip leader though. 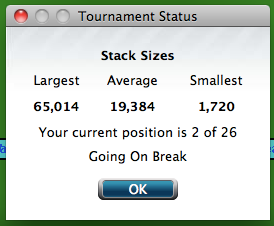 Still 2nd, down to 12, chip leader just won a 60k pot so hes got around 50k advantage.. just wanna sneak into the top 3/4 though at the moment. They all seem to be betting way more than me. 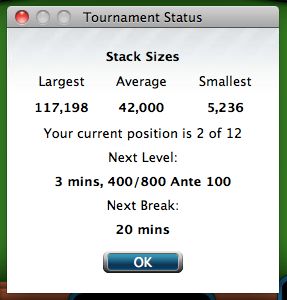 Down to the final table, guess whos first! Long, long, long way to go though.. 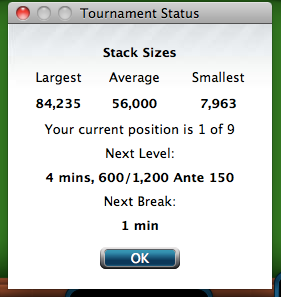 2nd of 5, all I want is top three though. Leader has 100k+ more than me, but 4th and 5th are short stacked. Talk about nerves, Betfair is fooking easy to be calm compared to this..! 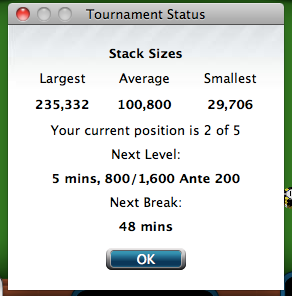 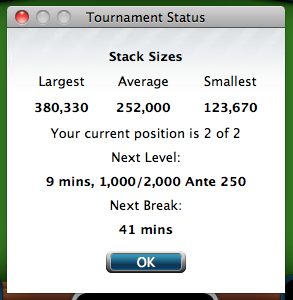 12-30AM. Finally over, 2nd, small bit gutted not to get first in the end (what am I like!), got it to 300k v 200k and then busted with 9966 v ATT8, nothing hit on the flop/turn/river so he wins with tens, what an odd way to lose really (PLO you'd expect something bar just a pair). He kept trying to go awe-in preflop nearly every hand, it was a bugger.

What an amazing feeling though, bloody hell its nerve racking too! I had Ems watching on the couch beside me for the final table that was the worse thing ever for nerves. Like I said, Betfair is easy compared to that for being calm..!

Amazing though, I just searched the blog, I remember posting on the 3rd of March this year I went awe-in in a ring game without even knowing rules of PLO. Been playing/practicing since then though.

Ah, this is epic! Must be something in the water though clearly because my best position before this was 13th which was just on Monday a few posts below. Best get myself to WSOP before the weekend.. (wouldnt go that far).

I'm rabbiting on, I wont be able to sleep now anyway. I think if I move up to 40k GTD its 6k for first and 3.5k/2.5k-ish for 2nd/3rd, but sure this will probably never be topped. Amazing.

PS. Didnt have a bet on Betfair today, well actually did Inser v Mahut but its something like 50-50 in the last set going into tomorrow, I got fed up it went on that long FFS. Dont have a P&L until tomorrow with it anyway, or whenever they finish because it could go on and on and on for days the way they were playing. 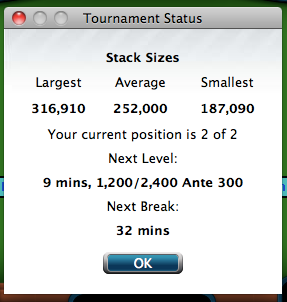