Leaving out all the business with St Nic, I've been incredibly lucky this week, maybe someone up there is taking pity on me after the horse.

The boxing - backed Napa, if anyone remembers his last fight, he was trading at 1.01/1.02 at the bell, clearly won, and was completely robbed by the Friday Fight Night judges (nothing new there). Anyway, I priced him up as a winner last time, had €150 on. And because I was going away and couldnt watch, traded out. He was winning by four rounds when he retired on his stool, dont know what price he would have traded at, but I think viewers are sure not to let the price go too low after seeing whats happened before. €1 win instead of a €150 loss. Jammy.

The GAA - backed Kerry against Cork, Kerry at home, Cork havent won there for 15 years and Kerry were the second favourites, great price, €200 on. Again because I was away traded out, and it finished a draw. Kerry were always 3/4 points behind the whole game so it would of been a horrible in play position too if I was watching. 60 cent loss instead of a €200 loss. Jammy. I'm saying nothing on Kildare losing by the way - less said the better!

Didnt have the time to do the cricket really, and the only other bet I had was Fame And Glory, covered a small bit of the St Nic loss, but still a healthy losing week of €240. But sure I was minus €300 at the start of it so I'll take it, it could have been worse.

Nice to see Jan Vermeer improve though, by my estimates he came forward around nine pound from that race at The Curragh, but sticking with my opinion from straight after the race in that he'll be lucky if he ever wins another race given the history, I'll change my mind if (when) he wins. I still think Blanco won the Dante by default and in hindsight the bit breaking obviously had a lot to do with Workforces run, lot of stick after saying APOB should of ran Blanco in the Derby because the second won, I think where Coordinated Cut finished would be more of a fair reflection on the Dante, he only finished less than length behind Workforce too like, the bit breaking was obviously massive in hindsight. Midas Touch is a good horse but hasnt got the turn of foot like some of the others. And At First sight, what a hero! One of my favourites all year waffling on about him, for the life of me didnt see him finishing second though, fair played to him, hes so tough and honest, just a nice likable horse personality wise.

Fame And Glory won again, but you know as good as Sariska is, its still a colt v a filly at the end of the day, think the low Arc quotes might be a bit premature, there'll be harder tests ahead. And Remember When ran a cracker in the Oaks, bit of a trip doubt beforehand and Johnny set sail fairly early, thats just the way the race panned out though nothing wrong with what he did, she'll come froward from being held up a touch more and even maybe come back to 1M2F, she looks fairly decent, probably the best maiden in Europe at this stage.

Workforce was ultra impressive though, I have no idea whether St Nic would have won or even gone close, sure no matter what youre only guessing. No surprise to see the reserves lose lets be honest, cant read too much into that, I reckon they both would have been first and second, in what order who knows. They wont meet in The Curragh anyway, because theres only 22 days between the two Derbys and St Nic has a muscle injury, it would be very, very close to be fit enough but I think APOB is giving him more time. If I have learned anything over the week, its not about backing or laying antepost, its that punters perception is always far, far greater than the reality of a situation. No one believes APOB when he tells the truth, its funny, to me anyway.

Anyway its in the past now, its a bank holiday in Ireland today so theres nothing else to do bar head to Naas. Not lumping on anything, but Purple Glow must have a serious chance of winning the 3-10 on the Samuel Morse form, by far the best form in the book, its Looking Lovelys first run and I thought Eastern Light would be stepped up in trip after the last day not back to 5F, was expecting around 4/6 for Purple Glow but its 2.14 on Betfair at the moment, probably be bigger on course too. Then in the 4-10 Catherineofaragon has the beating of Radharcnafarraige on a form line through Eastern Light at Navan, that was Cathers first run too and Radharcnafarraige made hard work of beating Eastern Light in Naas on her third run. Was expecting them both to be shorter though, think Cather will win, but the only thing thats putting me off is she ran in Dundalk the last day, do Dundalk winners win Group races normally? Not in my opinion, but I suppose being a filly a win is important and it was an easy race in Dundalk, she won cant ask for more, I hate Dundalk though, so cant back her big after that but she'd be nearly a good thing on the Navan form. 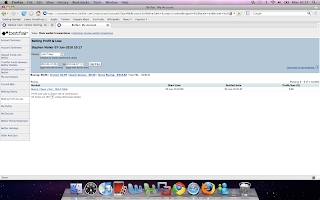