What a bumper weekend of GAA, absolutely knackered. That Cork v Waterford draw last night left me hanging, although it was the Cork penalty late on that messed my book up really, I had -€200 Cork +€400 Waterford and +€200 draw, GAA markets dont suspend so Cork were 1.8 stepping up to take it, I level out Cork/Draw looking after myself, then he misses and I was left head in hands. Got €20 off extra time though.

Finally Kildare won in style though, praise be to Allah, about time FFS! Was a bit timid in that market, they were in a fantastic position one point up at HT and still odds against (cracking price IMO), but just being a fan I sort of didnt want to jinx them.. no gambling logic at all but you get the idea. I reckon we have a good chance against whoever we get next, I'll love to play Dublin in Croker at some stage.

I've stayed away from everything else and I'm thinking from now on I'll stay away from the smaller horse meetings too for good, for the mental side of things more so than profit, I wont get bored or annoyed. Theyve been the only thing thats annoyed me this week, everything else is fine you know.

I notice too that Betfair have plans to float sometime around September, I dont really know what to make of it. On one hand you could argue it might open up more markets, India, America, China, more of Asia, it could really pick up for business if those countries get involved. On the other hand, one has to remember that Betfair are greedy bar-stewards and dont do anything for a reason that doesnt suit themselves so you could say profits have peaked and they want to cash in while they still can. Then theres legislation? Competition? Premium charge bad press? All sorts of things really. Either way I wont be buying shares, ideally from a gambling point of view you'd be hoping it kicks off and we get a huge amount of new customers betting into what seems like a shark only pool at this stage. I dont know what'll happen anyway, I do think though that the valuation looks far too high, massively high.

I also think its brilliant though that in the 'Live Chat' section held on Tuesday Betfair said, and I quote, "We’re certainly trying to run the business well and keep it growing and successful but have no immediate plans to float." As honest and trustworthy as ever lads, cracking job youre doing!

The weeks been up and down, I was a bit fed up on Monday/Tuesday, took Wednesday and most of Thursday off as a result, boxing and cricket was on Friday so I was all happy again, then the weekend GAA couldnt ask for more. If I give up the horses small meetings I should be grand for less frustration, because it leaks over into other markets, like the Pakistan match seething when there was no reason to seethe. Apart from that happy days, Tiger playing shite in the Open takes a fair bit of gloss off yesterday and todays work though, will he ever win a major again? You'd seriously have to question it.

On another note, happy 92nd birthday to the living legend that is Nelson Mandela. A true inspiration, what a man. That poem was probably the only good thing to come out of Invictus however.. 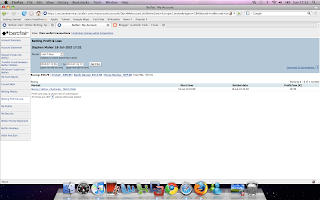