I Cannot Do Any More..

Feckin' rain..! I'm still convinced that had we got the full 40 overs in Derby would have won, but sure cant control the weather. We were told about rain concerns at the start so thats fair enough, but was pretty keen on Derby having notched up 225, then in one over (it rained obviously) the price went from 1.65 to 1.1, a proper head in hands moment staring at this..

You know what the most amazing thing was? They never went off! They didnt even stop play FFS, whoever was backing 1.1 was a nutter. Its gets back to just under 1.3ish so I can take a reasonable loss thinking it was the best thing to do at the time. Then of course in true seething style a wicket goes so if I held my position I'd be awe-green, but instead I am awe-red. Great. Isnt gambling fun.

Then it rains again, and this time we go off, usually whenever I'm red I tend to make it worse for some reason, havent worked out why, I'm sure if I knew it wouldnt happen, but anyway I managed to get it down to €3 awe-red from €50 trading the market moves when they were putting on covers and taking them off, on, off, on, off. Which I'm pretty chuffed about to be honest given the circumstances.

Then, with 3 overs to go, it rains and Derby go off having lost by one run on D/L.

You know when Floyd Mayweather is in training, he shouts "Hard Work" and the rest of the team shouts back "Pays DA Bills," well in my case hard work means a €2 loss instead of €50.. not quite the same thing really.

I'm fairly annoyed how the market panned out because if you look at excel at the bottom they start off incredibly slow and the rate goes up on what was a difficult pitch, but Lumpy kept shoving on money at 1.7 and wouldnt let it break through. It was raining when they got 13 and 10 off the 10th and 11th (30 and 29) overs they basically had free hits, then if you look from 26 to 19 they couldnt score at all and the rate was going up massively, play the full game I reckon Derby could have won, or easily at least been in the position to flip the market.

D/L wasnt too bad to them, RRR over 8 when they came back but with wickets in hand you know its always easier to get a high rate at the end, 6.8 with 18 to go is harder (IMO) compared to 8.1 with 9 to go because you can speed up obviously nearing the end when losing wickets isnt too key.

The West Indies T20 competition is on Thursday, ESPN have it, never seen it before so will have a little look to see what the story is, think it goes on every night until 1AM or so, if I dont do that, thats it until Friday Fight Night. Giving the racing up means far more free time, but I'm 100% sure I'll be a happier person away from gaff meetings in running markets during the day once I fill the time, played golf today got the whole "The Open Buzz" out of the system. 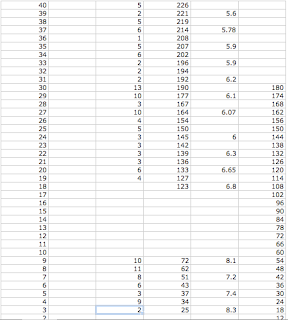