Just over level since Tuesday, bit muggish on the cricket last night - had every opportunity to green out didnt, then a small misclick, backed 1.38 when I meant to click on 1.5, thats probably the main drawback of Gruss being so fast, the odds can actually change by the time your finger presses down, 1.38 was next inline after 1.5 - which is incredibly unlucky for the amount of times that will actually happen in a cricket market. But I would have lost anyway, that just added a few Euro and pissed me off, which didnt help matters.

The horses have been better and kept me afloat though, was up around €120ish after Sea Lord won, we had all backed it in the books and KF gave it an absolute peach, got that giddy high gambling buzz after that and dropped €70 over the next few races in running, doesnt take long to come back down to earth.

I've got max liability on Sven for next Villa manager at the moment, cant for the life of me understand why hes down to 2.5, fair enough HE has said HE wants the job, but Villa havent even mentioned him, have to remember this is Sven and the bloke wants every job going, it was only last week he said he wanted to manage Fulham, now that jobs gone he wants Villa. I'm happy to lay 2.5 anyway and sure if they appoint him, I'll pay out no bother.

Was planning on not backing Eldrick this week, after backing him E/W 8 places in The Open, being just off the lead and down to 1.4 top 10 and still not getting the job done, said that was that for the year. Opening birdie, birdie did raise an eyebrow though, traded his price on Betfair (first time this year) for €200 green on him, zero the field. I have no interest in trading the whole event, I'm not a fan of trading golf, I much prefer backing cash and just letting things run, but at least if he wins now I'll get some losses from earlier in the year back, if you asked me WILL he win, my answer would be no. Hope I'm wrong though because hes my favourite sportsman by miles, its not a swinging or putting thing at this stage, its whats in between the ears. 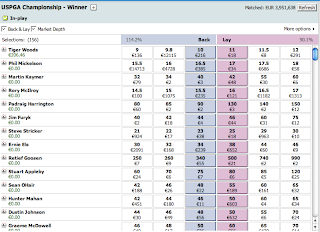