Before I say anything, can I just say I take full credit for Newcastle winning 6-0 today after slagging off the tache yesterday. The tache has powers untold to man, how else do you explain Newcastle winning sure. He even scored, amazing scenes. 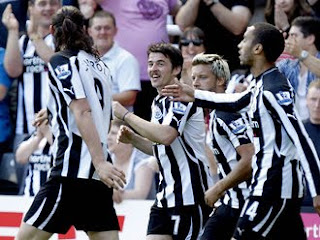 Somehow, after years of watching it happen, Dublin imploding isnt that funny anymore. I suppose whats rare is wonderful, were used to it by now. Whats still funny is the fans seething, fear not though next year is their year, or wait wasnt this year their year? Or was it last year that was their year? I'm confused. D'ya remember the time they were 7 or 8 points ahead of Mayo with a few minutes to go and still ended up losing, then the thrashings by Tyrone and Kerry. I dont think they'll get a better chance than today though, Cork were poor enough IMO, but Dublin lost it (for me) in the last 10 minutes rather than Cork winning it. Anyway, good result for Kildare (and Down if they beat us), because Cork are very beatable IMO and arent as good as everyone makes them out to be. Dublin arent fantastic by any means but were in command and five points up nearly the whole game until they decided to go into metldown, Cork only took the lead near stoppage time, they'll undoubtedly be favourites though against whoever wins next weekend.

Cant believe what happened me this morning, I base my whole morning around William Hill going 14/1 on No Goalscorer, real price is around 4/1, what happens first thing? Goal, FFS. Beforehand, a goal first scoring play was 35/1 for Cork, 40/1 for Dublin, gubbed by a 40/1 shot. Its amazingly weird how something always happens when you try to be too clever. Also amazing how bad odds compilers can be, even if its a mistake, how do you miss something big like that FFS. 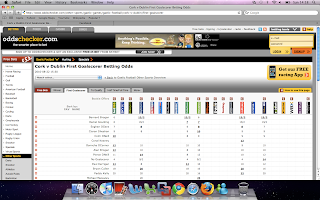 Been a good week, was a little bit jammy on the golf because the market let Johnson hit the 1.3s, planning to lay him that just worked out almost too easy. Had a good test match, love watching Pakistan play, I dont really enjoy test match trading but with them theres always something happening to make it interesting - more importantly I suppose that always means market movement, I still remember the day I laid Saffers at 2.74 in the morning and at the close of play they were sitting at exactly 2.74, with no overs lost either! Still very early days on soccer trading so I expect to lose for the next few weeks at least before either turning it around or giving up (again..). 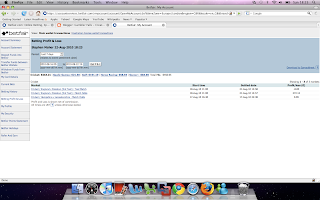