He well and truly lost the plot this evening, if you opposed him the market was pretty damn easy (for a change!). As is his way he threw money at a situation where the odds should be moving against him but he wants to keep it low because hes lumped on low, events (for a change!) went against him totally. Clover. He has more money than the rest of us though so hes not far wrong most of the time, he had a shocker tonight though. The only mistake I made was greening out too soon but sure theres no way of knowing its gonna be a 1.01 train you know, its only an afterthought.

Was pretty impressed with City last night, although Liverpool didnt offer too much, City looked solid, cant see them giving away too many goals at home this season, lining up 4-5-1 might be a small problem for scoring, Sky comms were calling it 4-3-3, looks pretty much like a 4-5-1 to me, theyre nearly all defensive midfielders, look more trustworthy than before though. Then again Liverpool are gash.

Ems just asked me what time were leaving on Sunday for this semi final, nerves are starting to kick in just thinking about it, whats it gonna like on Sunday FFS. Funnily enough Kildare have failed to score the first point in their last three games, against Meath, Monaghan and Derry, we also conceded the first point against Louth while still in Leinster. Down on the other hand are well known fast starters, were even six points up against Kerry after 10 minutes (who were favs for the whole thing at the time). PP goes evens on Down first point and if the last few games are anything to go by it seems a good bet, everyone else is odds on, its generally a muggish market though because the books seem to let you have what you want on. I am on us to win the game though, whether it be shrewd or blind faith we'll find out, am expecting a slow start and maybe trade odds against from the opening 1.9ish too.

Anyway, thats five sleepless nights away, got a poker tournament going on at the moment, 44th with 144 left so hopeful, never actually won one yet so final table will be the aim as usual, managed a 5th last week, apart from that been scarce for the last month or so after the good run of final tables. Goes in roundabouts I suppose. 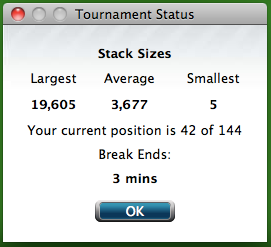 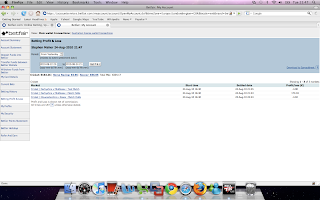 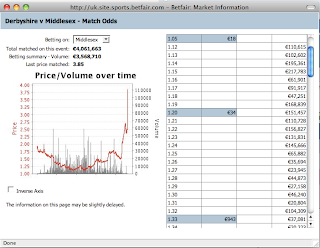