Ireland when the weather is like this is simply the best place in the world IMO, not a cloud in the sky! Pity it only happens a handful of times, be handy if global warming would speed up a bit..

Anyway, its gonna be Kilkenny v Tipperary in the hurling final - dunno what to make of today, Tipp werent fantastic, and every time they looked to have the game won they eased off and let Waterford score 2 or 3 points, nothing more annoying than that as a betting man because you never want a bounce out and nervy moments when there shouldnt be. Kilkenny have a few injuries for the final but it'll still be a shock if theyre beaten in fairness. We managed to get two free tickets to todays game in the supermarket this morning, random! The Kildare hurling team doesnt even get into the Championship. We play our football semi on the 29th - I've already took a bit of evens in Ladbrokes shops but with the slow starts I'm not keen going massive on them.

The Pepe Reina mistake was pretty funny too! Ah Liverpool, new season but it never gets old..

Steady week. Havent done anything of mighty muggishness since the cricket Wednesday night, that was the first market back since the internet went down so just forget about it sure. Apart from that, havent done anything great and just got on with it. Its got to the stage now where I know what not to do so its just about avoiding that list, avoiding guessing, and just craic on with the rest.

Still a little annoyed with the tie last night because it would have added €70, thinking about it though cricket is fantastic in a sense because it finishes so late, you can actually get really wound up and annoyed but without any inclination to chase or look to bet again because the day is over. Wake up the next morning and its forgotten about, horse racing is probably the worst sport when youre tilted because theres a never ending stream of races.

My Tigger Wood green is worthless the useless bar-steward, and Dustin Johnson has just hit the front might be worth a lay at some stage, remember the massive meltdown in the US Open. McIlroy wont get a better chance than this for a while IMO. 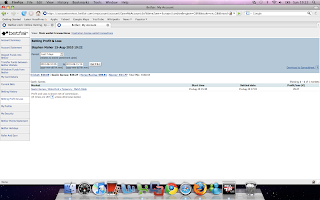