Stop The World I Want To Get Off!

Aw man, Kildare lose by two points (and before I start I'm not saying we "should" have won), goal given against us that clearly wasnt, score a clear point that wasnt given, hit the post twice, once for a goal, once for a point, hit the crossbar in stoppage time! Nothing went right at all - every single 50/50 went against us it was unreal bad luck, having said that you shouldnt be relying on luck to win you a game and we gave the ball away far too much.

Couple of points - it being a semi final today we had referees in the umpire positions, so how the fook do you miss the square ball for the Down goal, everyone in the crowd saw it, how'd they miss it, its the only thing they have to check FFS! Shocker. And the point in the first half that sailed over in front of the Hill wasnt given - again shocking umpiring.

No blame attached to the ref at all, and Down played well, fair played to them and good luck to them in the final. Absolutely gutted for the lads, Johnny Doyle was magnificent, just fooking brilliant, what a hero. Deserves an All Star IMO, and if Brogan for Dublin gets one and Doyle doesnt, having outscored him all summer, I'll be seething.

If that wasnt bad enough, shocker with the cricket being all over the news for all the wrong reasons this morning, actually the worst reason possible. Ah, I dunno what to say about it you know, I cant be bothered arguing over it all to be honest because fixing is something you just cant control - just have to trade events and get on with it, I'm gutted Amir is involved, only 18 years old and what a talent.

Main misconceptions today have been the New Of The World paying £150,000 for the no balls - they didnt, the no balls were just proof of what could be done and the £150,000 was 'membership' into getting the important information later. And that it was punters paying for the information - it wasnt, it seems its big bookies behind it, one line stuck me saying: And to hammer home the amounts of money our man could win, Majeed called an Indian bookie he regularly deals with and asked him how much he would pay for a definite Oval Test result. Majeed demanded $1.2million but the bookie replied, "I'll give you one (million)."

The biggest misconception is the world begins and ends with Betfair, the Asian market dwarfs Betfair, and the illegal market dwarfs it by a hundred. Its no surprise that THIS match was brought up, there has been rumors since it happened - BUT Pakistan were approx 1.22 on Betfair at the time to chase down the total, and it wasnt being laid for thousands, you wouldnt associate a 1.22 shot with something that was fixed. All the information seems to be going to layers in Asia NOT punters, illegal betting - also Betfair leaves an audit trail thats no good for them, and such is the market one million must be a good price for them to pay. Shocking day for cricket though.

The most interesting piece to come out though IMO was Boom Boom coming out on a news channel in pakistan and saying he had went to the board to complain and they did nothing, can read it here, now this line is unreal - "Shahid told the management that he suspected Mazhar and Azhar were linked to bookmakers and were corrupting players particularly Salman Butt and Kamran Akmal," the source said. So, WHY after that happening did they install Butt as captain? Have to ask that question. Youve a new captain involved, and the many before him who have been suspended/stepped down over similar allegations, a new 18 year old in the team involved, its not just a few in the team is it, where does it start, how high up?

Anyway, apart from Kildare losing its been a pretty good week, happy with the test match finishing a day early to give me a day off tomorrow, I'm heartbroken losing like that, I'd have preferred losing by 10pts just to be definite in my mind. Lucky I'm not the Taoiseach because I want to go play golf tomorrow on my day off - apparently hes not allowed enjoy himself on his time off anymore because some have borrowed more money than they can pay back and the country is going down the swanee, so the papers say every single day now, given up reading ages ago. Taoiseach is a worse job than managing England at the World Cup these days. I'd seriously love to be a trader in a bank though compared to Betfair, imagine just getting a blank cheque back at the end of every week with someone saying here fill in your losses it'll be grand, we'll go for a pint dont worry about it. Clover.

So, it is with great regret I withdraw my application for Taoiseach on golfing grounds. I may still run for President though, that seems like a handy job, meet up with Obama every few weeks, shake hands whats the craic, come home feet up, why not.

My CV currently consists of something like this: "Skills include spending 12 hours a day on Facebook/Twitter, watching sports, swanning around, dont really like early mornings so probably best I start around 12ish for a lie on, I dont like working too late either probably wanna finish up at 4 to beat the traffic home for the cricket, my mate says hes gonna bowl a no ball in the 4th over tonight you know, cant work weekends either because I like my rest and I'd like an hour break each day to nip off to Boylesports for the 49s and a free coffee." Apply within. 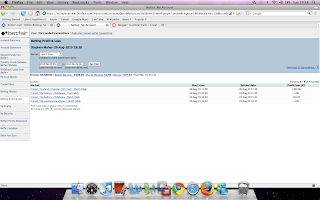